Welcome back to the #40LentPrompts link-up. Once again we have 6 prompts to choose from. Go here to Monday’s post to view this week’s writing prompts. Make sure to use the hashtag #40LentPrompts when you share your posts on social media. 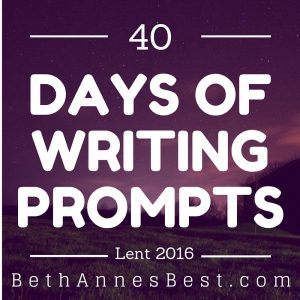 This week the prompts weren’t so hard ha! I think I have a few blanks still in next weeks that I’ll be filling in with some more interesting prompts. Again if you have any ideas let me know!

18. What do you think life as a disciple of Jesus would have been like?

Last week I wrote a reflection about the desert and I talked a lot about Jesus’ time and my curiosity. Which is how I came up with this topic.

I think being a disciple of Jesus would have been very BUSY. I think it would have been similar to how superhero’s lives. One minute they are doing their daily regular jobs of fishing of wood working or other type of work they did and the next thing they know they have Jesus calling them away to go on a mission or help him with something.

Until I heard him talk about the disciplines that way I never really saw them as individual people. I know that sounds dumb but the way they are portrayed in the bible it is sometimes hard to relate to them. Most stories just say “the disciples” as a group and they often don’t mention names. Sometimes they have names but sometimes they don’t.

20. Did you attend Stations of the Cross this lent? Reflect on your experience. (ex. were they spoken or acted out)

No. I have not attended Stations in way too long. Friday’s are hard for me. By the time Friday rolls around I’m exhausted and beat from the work week.

I have attended stations many times though. A really good one we did while studying Mary was Stations based on Mary’s point of view.

I LOVE attending live stations where they act out the different ones. Our last parish’s Spanish community did an excellent job acting them out with words, costumes, and acting. They even had whips and hung a guy on a cross. Most of it was in Spanish and I didn’t know what words they were saying but you didn’t need to. You could figure out what was going on by their actions.

In college, they used to do a walking stations around the city. Different schools and groups/organizations in the city were in charge of performing different stations. Each station was near a different building in the city. This was also very moving as it was also an evangelization tool that people would watch us as we walked by. I’d love to do something like this in St. Augustine on Good Friday or a Friday during lent but haven’t pursued it enough to figure out how to get it started.