I want to apologize in advance for the formatting of this blog post. I have NO IDEA why I can’t get EVERYTHING to look the same and it’s DRIVING ME INSANE. I think I need to redo my template and I wasn’t about to retype everything after I finished writing this post so bare with me this week 🙂

Wednesday afternoon there was a FLASHMOB-PROPOSAL downtown 20 minutes from where I live! I’m so mad I missed it! I think it would be awesome to be a part of one or at least watch one someday…

Over the last few weeks I’ve mailed a TON of Postcrossing Postcards. One even went to Pennsylvania! I love sending and receiving snail mail but I NEVER have stamps!! oops…Then I got thiese really ugly metered stamps from the machine last week I’m trying to get rid of. It’s really neat to get cards from different parts of the world. One guy asked me to send him a watch…yeah I guess he likes to tell time?

I finished another item off my 30 Before 30 list. I finally read a graphic novel. This novel was really cool because it was about a BLOGGER!! It was called Confessions of a Blabbermouth. It was a really fast read (once I set my mind to it) since there are lots of pictures. Her blog was pretty awesome it was all these rants about her life basically. In the end they use her blog to help her moms new boyfriends daughter reveal something her dad is doing when he won’t listen to her. It’s a clean book (I promise!) but that is the best way to phrase it without giving too much away!!

I attempted to go watch fireworks last night but I refused to go 5 hours early and 1-2 hours early I couldn’t find anywhere to park/view the fireworks unless I wanted to walk 5 miles. So instead I went and got Rita’s Ice/Custard and sat on the pier at the beach and watched tourists/locals shoot off their own fireworks. It was way more entertaining than what the professionals do anyway. They kept setting these little ones off that basically look like a bonfire and these little kids kept dancing when they went off like they were indians or something…it was HILARIOUS.

Let me know if you have any crazy wedding stories/rants. I have this tumblr and everyone that has read it told me it’s HILARIOUS and I need to keep adding to it even after the wedding is over with contributions. Haven’t figured out how to get those yet though so thought I’d ask here.

I’m on the launch team for this AWESOME book that EVERYONE needs to read right now. No joke stop what you are doing and go buy this book. I’m only on Secret #30 but so far everything I have read is great. I actually blogged about the blog post I read that this book inspired several months ago. It’s called 101 Secrets for your Twenties by Paul Agone (who has an AWESOME BLOG as well). A lot of the information even applies to you if you aren’t in your 20s. A lot of the bloggers that are on the launch team with me say this book is now their “GO TO Graduation Gift” for everyone they know. We’re hoping to do a giveaway with this in the next few weeks and I’ll be doing a full-blown review later on in July. 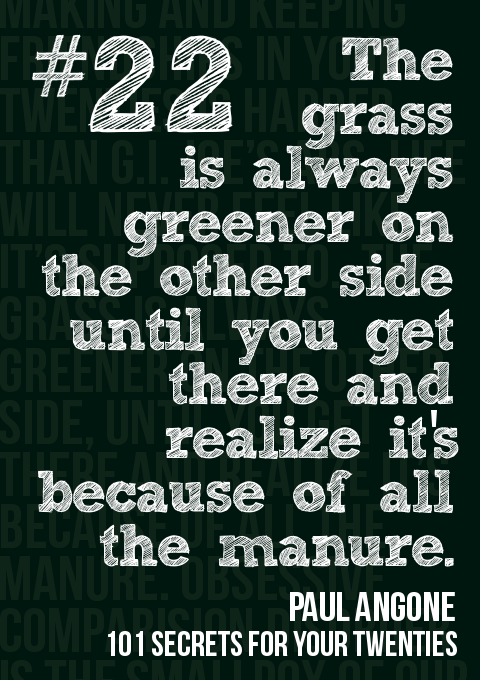 I actually read Paul’s blog pretty regularly. I subscribed for his email updates when a friend posted one of his articles in a young professionals facebook group and that is how I found out about the launch team. I was actually REALLY SHOCKED that I was picked for the team. Especially because 90% of the people on the launch team are 10x more awesome than I am and this little blog. But I just decided god wanted me on it because this book is seriously awesome!

My mom has been on vacation up in the Georgia mountains all week and comes home tomorrow (FINALLY!) I miss her! She hasn’t had any cell service so I’ve only been able to text her and it’s really getting old!! She told me that on Sunday we’ll do something fun together! YAY!