Welcome back to another installment of Answer Me This! 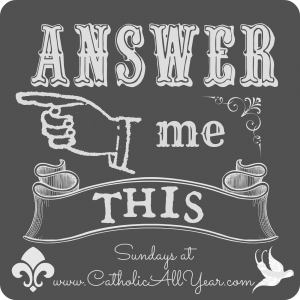 1. What is your favorite room in the house? My room I guess? Although I really wished we had an extra bedroom I could set up as an office so my bedroom doesn’t have to also be my office. Although if you saw the mess that is my room you probably wouldn’t think I liked it HA

2. Do you subscribe to any magazines or other periodicals? I used to get All You and Rachel Ray but I never really had time to read them thoroughly so I cancelled them. I’m more of a blog/internet reader than magazines. I thought about getting the Magnificat but I got the iMissal app instead and I would forget it/lose it all the time.

3. How do you feel about the sign of peace in Mass? Enriching? Awkward? Overdone? Just right? Some combination of the above? I’m going to make everyone mad about this debate and say I LOVE IT. As a single person with very few friends in a newish town it’s sometimes the only time I get to have interaction with other people.

My mom even told me a few weeks ago that the years after my dad passed away the sign of peace sometimes was the only time people looked her in the eye and talked to her (well said peace be with you) and I’m guessing they also talked to her without bring up that she was “the poor widow” and of what happened.

Yeah we should be doing this stuff outside of mass BUT it doesn’t happen people just leave when mass is over and heck sometimes before mass is officially over!  I think if you look at the mass as a communal meal it really does make sense. But most people don’t always make that connection.

We do an awesome activity in the 2nd grade where we set up the altar and a family meal table with the correlations. It’s awesome. I should blog it someday.4. What is your least favorite sound? People slurping soup….ugh it annoys me so much. My moms dad was English and brought up super proper and therefore my mom was brought up with the same table manners and we were never allowed to do it and I guess I just notice it that much more. If you do it I never say anything but I usually cringe inside. 5. What was your favorite TV show (or shows) growing up? Man I loved so many shows. Full House, Boy Meets World (and yes I’m now watching it’s spin-off Girl Meets World), Step by Step, Teen Angel, 7th Heaven, Gilmore Girls, and One Tree Hill. (and many more)6. What are your favorite TV shows now? Would you like to see my DVR? I’m a TVaholic. Right now it’s summer so not a lot of stuff is on but right now my favorite shows are the ABC Family dramas. During the year the comedies like Big Bang Theory are probably my favorite. 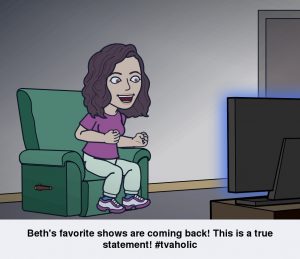 Now go over the Kendra’s to see her answers and everyone else’s answers!