This weeks topic of Chivalry was suggested by Sarah Therese!

When I saw this topic I thought of a friends facebook status that I saw a few weeks ago. She made it even easier for me to share as it was a photo of a status from last year via the lovely timehop app. 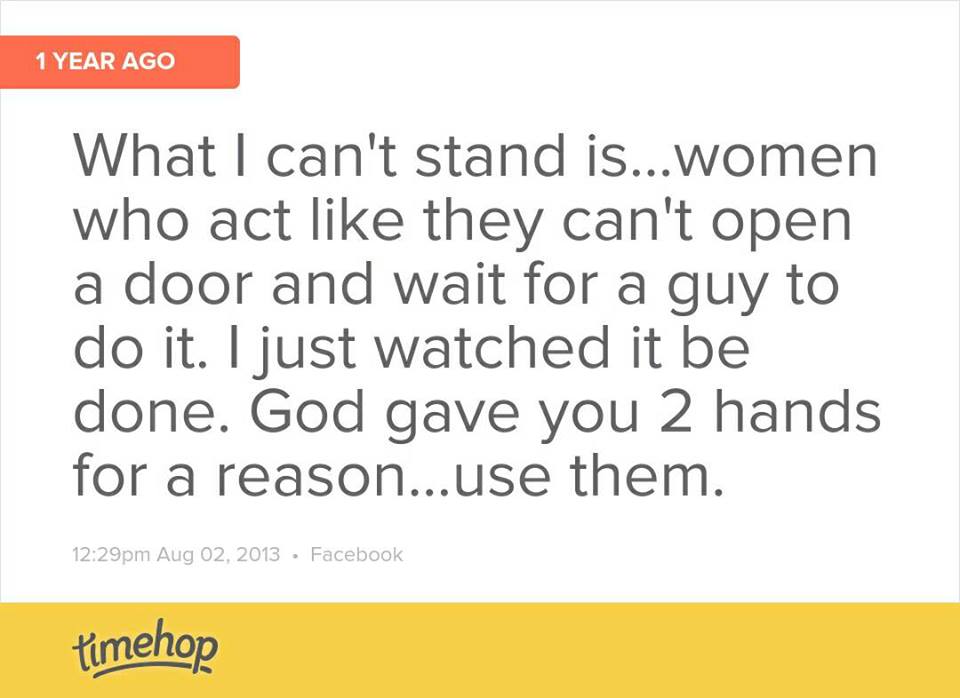 She wrote that this STILL annoys her and the people in the comments of the photo were about half and half. Some girls said that it makes them feel good when guys open doors for them and other people thought it was dumb when girls MAKE guys open doors for them. Some said men only need to do it if your hands are full carrying things (one person works in a store of some sort).

But this really got me thinking. Is opening doors really that weird? Is it expected? Is it rude? Is it nice? I always think it is a nice thing to do but I don’t expect it either…if he doesn’t get to it first I’ll open the door. I don’t know. I partially felt that these girls feel that these other women MAKE their boyfriends/husbands open the doors for them. Like if they get to a door they will stand there and WAIT for them to open the door as if they are incapable of doing so. Well okay maybe that is a bit much? I don’t really know…or maybe they are just over exaggerating.

But really what is chivalry? I think Chivalry can go both ways as well. It’s respecting each other. Helping each other. If you are at the grocery store and see a man coming in with a lot of stuff open the door for him to make it easier for him. Or if you see a mom with little kids open the door for her. I think when it comes to chivalry we always think about opening doors but there are other things as well…which uh I can’t really think of right now. But I think RESPECT is a big thing when it comes to Chivalry.