This was our last FULL DAY in Greece :(. Today we checked out of our hotel in Delphi and headed back to Athens. It was kind of a dejavu feeling as we  stayed in the same hotel the first few nights we were in Athens. We got to Athens around lunchtime, checked into our hotel, and got Gyro’s for lunch. One of the best foods we had in Greece were the Gyro’s (although it’s probably the ONLY food I don’t have a picture of).

Our afternoon in Athens was to catch anything we missed the first time we were there at the beginning of the trip. Shay and I decided to go and look at some of the Byzantine churches. The concierge at the hotel 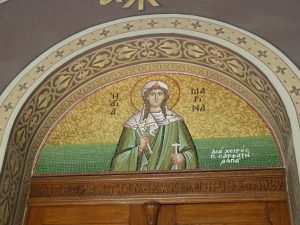 gave us a few names and addresses and off we went. The first church we found was called Saint Marina. It was not opened but from the outside I can only guess that the inside is very beautiful. According to a sign they had outside the church it explained that it was a dome shaped church with many murals that have been restored over the years. According to athensinfoguide.com the church has been a place that expectant mothers and mothers of sick children have gone to and prayed for their children. We were unable to go inside the church as it was closed but the outside was beautiful and I’m sure the murals inside are just as gorgeous. 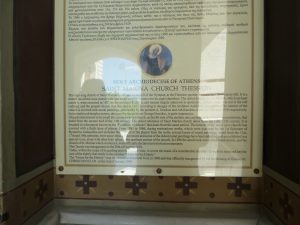 After we finished at Saint Marina  we walked around the promenade for some more churches to visit. We found one near the restaurant we ate lunch at but it was locked up so I didn’t even get the name of the church 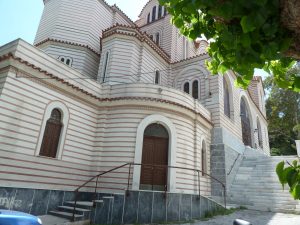 . It had a beautiful bell tower though. It was a working bell tower as we heard it play while we were in the area. 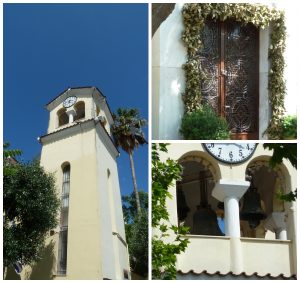 ome souvenirs. We each got a Greek Skirt that we had been looking for the entire trip. I just love the  colors and the layers of the skirt. We found a produce stand selling fresh Strawberries and we got a snack. They were so red, juicy, and fresh. As we were enjoying our snack we met a man from Africa that was telling us about his adventure to Greece and how he makes bracelets and different things to get by. I don’t remember everythin 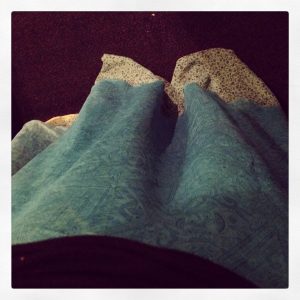 g we talked about but he was definitely an interesting person, until he wanted to add us as Facebook friends and then the conversation just turned creepy.

After we finished our snack we made our way back to the hotel to get ready for dinner. We ran into another man that was selling the most interesting paintings. They were these silvers shaped pieces placed onto a red and black canvas and it all went together. I had never seen anything like it. 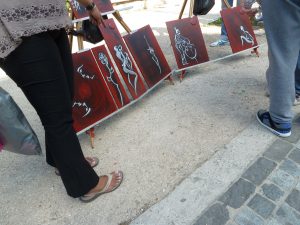 We decided to wear our new skirts and fit into Athens perfectly! Our last dinner together had a gorgeous view along with wonderful fellowship. We all said a toast to a wonderful trip and headed back to the hotel for one last night before getting a very early wake-up call to head to the airport. 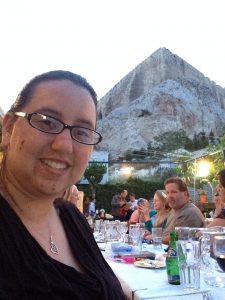