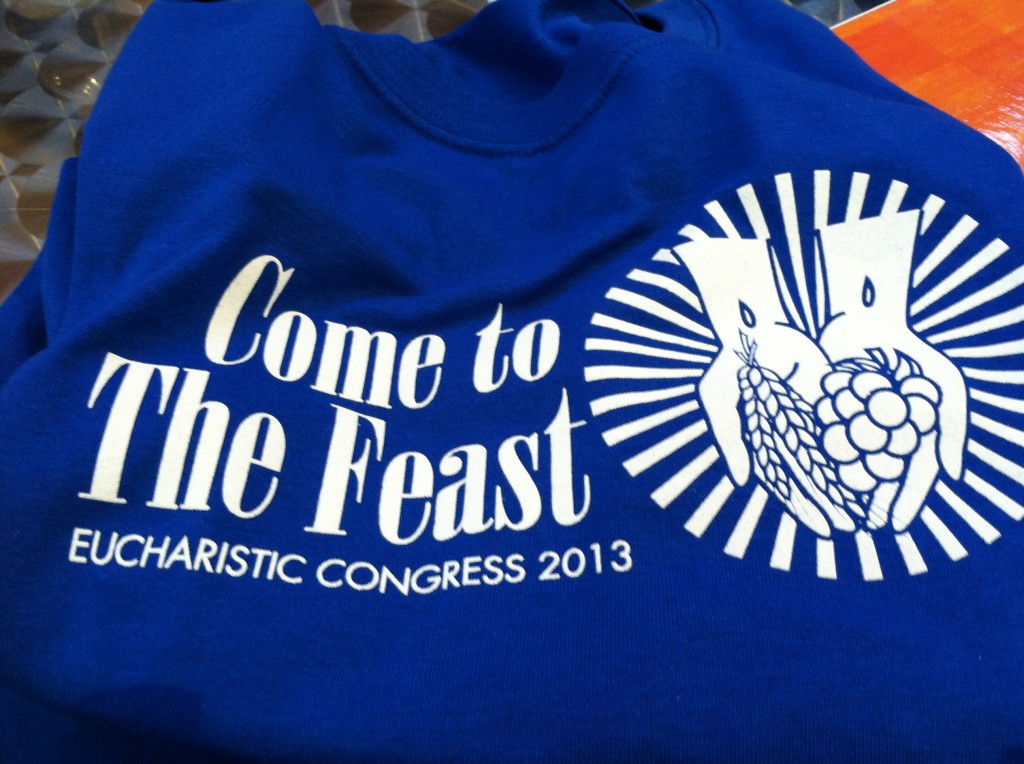 A few weeks ago I had the opportunity to attend a Eucharistic Congress put on by our diocese. Words cannot express how amazing the experience was. They had several amazing speakers at the congress not only for adults but for teens, young adults, and children and they had sessions in both English and Spanish. Obviously in every session the main topic was The Eucharist and I had never heard so many different people talk about The Eucharist all at one time it was a really interesting perspective. One thing I walked away with was how important the Eucharist is to me and to my Catholic Faith. There are a lot of more modern things that sometimes seem more Protestant to me that I enjoy in some parishes and sometimes when I can’t find them in catholic churches I think well maybe I should go to this church or that church but I never do and I finally realized it’s because of The Eucharist. The Eucharist can’t be found any other religion as the TRUE PRESENCE that Catholics Believe.

Some of the best stories I heard were by Randy Raus of Lifeteen. He told us how he converted to Catholicism in college after growing up Lutheran (although his family was basically Christmas-Easter Lutherans). He met a Catholic girl in college who invited him to mass and he went so he could spend more time with her but he soon realized that she was a very serious Catholic and would ask him questions about mass. This lead to him converting to Catholicism  And he said how he was in RCIA and it was a struggle between when he decided to come into the church and when he finally came into full communion with the church. Every week he went to mass and he wanted nothing more than to receive the eucharist at communion and he couldn’t yet. He had to wait.

This really made me realize how sometimes I take receiving the Eucharist at communion for granted. As a cradle catholic I’ve been “allowed” to receive communion since I was 8 years old. Granted I didn’t quite understand it when I was that young but I knew it was important. Over the years I’ve learned more and more about The Eucharist and really realize the gift that it is that we receive at mass.

Another story he told us was about how his two oldest children brought his younger brother to The Eucharist. His brother struggled with drugs, alcohol that eventually led to cancer. The last several years of his brothers life he lived with his family. When his brother knew he had cancer and didn’t have many more years to live Randy’s oldest children told him, “…but Uncle Ralph* (*I don’t remember his brothers name*) you can’t die before you experience the Eucharist.” Randy thought his kids were crazy for trying to convince his agonistic brother who never really believed in God his whole life to try and talk to his brother about the Eucharist but he let his kids do their thing. His kids kept talking to him about the power of the Eucharist and several months later his brother decided to join the church. The priest met with him 1 on 1 for private sessions for his catechesis and the Monday before a Tuesday surgery in a private ceremony he came into full communion with the church. He died not too long after that but the last few months/years of his life Randy hadn’t seen his brother more happy and he thanks his children for what they did for his brother (who has since passed away).

Another story the romantics who are reading this blog will like. Randy’s son was dating his now wife and he proposed to her in adoration in front of the blessed sacrament while on a Mission Trip. I don’t remember any of the specifics but I just remember thinking how cool that his son asked his then girlfriend to marry him right in front of Jesus to join him in the sacrament. And then I immediately thought that would be an awesome way for my future husband to propose to me. So keep note of that if you are reading this future spouse ;).

By the end of the weekend I had heard countless stories about The Eucharist, Saw a Eucharistic Procession, Went to Mass, went to exposition and adoration (once in the middle of the night), and heard Matt Maher sing a million songs over the whole weekend. I felt like I was at a weekend long Matt Maher concert. If you ever get the chance to attend a Eucharistic Congress GO! It will forever change your perspective of what The Eucharist means in your faith. Or at least it did for me.

And here some youtube videos that the Diocese made of the weekend: