That’s right readers today I have become an “expert” on the history of social media!

A few weeks ago I was listening to Kat’s Podcast – on How They Blog about Mastering Social Media. She gave a lot of good tips and I’ve learned a lot about social media over the years but the most interesting thing she mentioned was email.

She talked about how EMAIL was the ORIGINAL SOCIAL NETWORK. When I first heard that I thought what?!!? No way! That is INSANE! But the more I thought about it and she talked about newsletters and such the more it made sense and she was right!

See way back in the 90s I had a little program called AOL.  I used to hang out in chat rooms and on message boards. Did anyone hangout in Blackberry Creek? Now I’m probably showing my age but that place was awesome! A/S/L anyone?

I remember the days before SPAM mail and you couldn’t wait for the computer to yell. “YOU GOT MAIL!”

Fun video of all the internet sounds we used to hear in the AOL days.

Back in the AOL days you would meet people in chatrooms and people would exchange instant messages and then emails and start chatting back and forth. I guess really if you think about it the first social networks were chatrooms, instant messages, and emails. In reality I have no idea which came first and that isn’t really the point of this post.

My mom still belongs to a widows group that once met in an aol chatroom and then moved it to an email database and they still communicate back and forth via email. I even remember a few months ago asking her, “Why don’t you just create a facebook group?” And she told me, “Well we’ve been communicating like this for over 10 years and it works…why change?” And I guess it works…if it’s not broke why fix it?

Up until about 2 years ago I never really read blogs (in the form we see them today)..at least not regularly. Occasionally a facebook friend would put a link to their personal blog of their kids or travel adventures or someone would post a link to a cool article/blog postand I would read it but I never subscribed or looked around at the content of the blog. Other than that I wasn’t really “subscribed” to much…which is kind of weird because I’ve always been pretty active on the interwebs.

After reflecting on this I guess I have really always followed people/blogs/websites most of my internet life but I never called it that..it’s kind of hard to explain….

When we had AOL I would find some interesting things…I remember finding these things called “zines.” I have no idea how I even found them..I’m thinking that someone I met in a chatroom had one and was advertising their zine in the Hungry Ear chatroom (I looked that up) so I subscribed. And then the zines would advertise other peoples zines and I would subscribe to more. I can remember at one point my inbox was FULL of a ton of zines (at least 10..probably more..). There were all sorts of zines you could subscribe to:

Another thing to mention is these zines were TEXT ONLY..no graphics as this was during the dialup modem days and Graphics would take WAY too long to load. The only kinds of “graphics” that would appear were ones made of words like this: 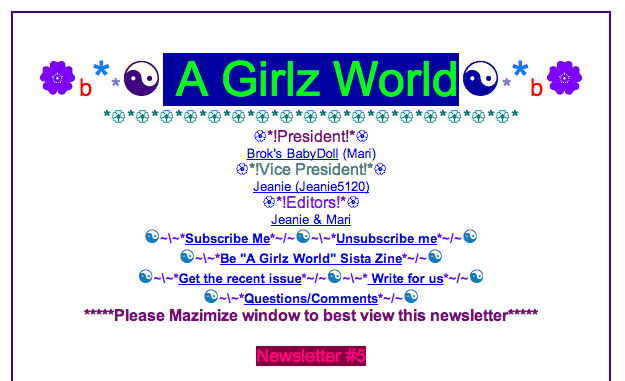 I think that is another reason some of these diary version zine’s were so popular and detailed. No one knew who you were. No one ever used their real names, no one knew what you looked like (couldn’t send photos due to load speeds and this was before many people had digital cameras/scanners). I think about teenagers today and how people talk how they overshare on the internet and looking back I and y peers I knew on the internet did the same things we just couldn’t share detailed photos of who we are or where we lived.

So way before “blogs” that we see today came around people were writing “blogs” and emailing them out in an email format called “zines” which were basically EMAIL NEWSLETTERS. I feel like things are going full circle as email newsletters are the big thing to push right now in the “blogging world.”

When I was in high school we no longer had AOL but all my friends had Livejournals and then Xangas and then on Myspace many of us even had a “journal/blog” section…I have a few “journals” on facebook but it wasn’t as popular as it was on myspace and stopped updating. I remember having a livejournal and xanga was fun. I was in some groups and met other users but it wasn’t anything extensive. There were a few people I’d read their blogs but just when I remembered or was bored but nothing I kept with regularly. Come to think of it I’m not sure you were able to receive email updates at this point. I can remember getting frustrated at one point because half the blogs I liked to check on every now and then would never update regularly.

I never wrote or edited a zine during this time of my life. I remember always wanting to but I didn’t know how or what to write about as like I said earlier most of the zines were written and edited by people much older than I.

I guess looking back I was always a writer and reader of online things whether it was blogs, newsletters, or “zines.” When I started writing this post I thought man I never read blogs until 2 years ago when I started writing my own and found the world of blogger and wordpress but after looking back no I really have always read them just not in the blogger/wordpress format.

I hope you have enjoyed my nostalgic look into the past. Did anyone else read zines? I know there are tons out there that did as when I was writing this post I decided to do some googling and I found several tumblrs, blog posts, and other website with archives of zines.

Google Search for “ZINES” with tons of resources and links to understand what the heck I’m talking about (if this is a new concept for you).

Any other zine readers/writers out there?