Because there aren’t enough blogs on this topic on the internet I need to share my own story.

There are so many “theories” out there about marriage. Some say marry young so you have your whole lives together. Others say wait until you’re older, more mature, and have worked on yourself. Because why rush because you “have your whole life in front of you.” 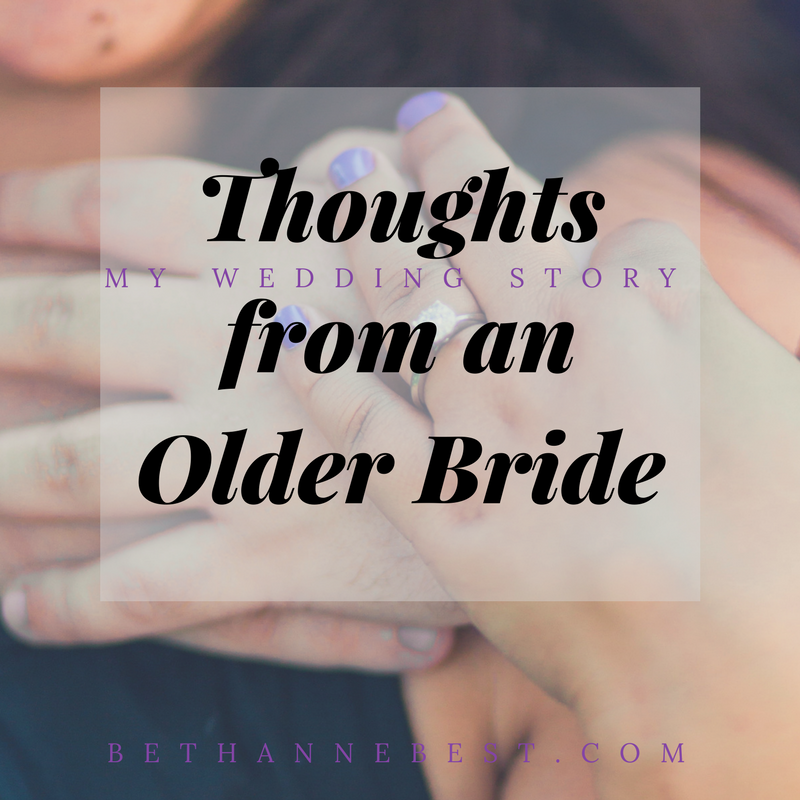 And then each person version of “marrying young/older” is different. Some think anyone that gets married under age 35 or 40 is “young” others think anyone that gets married under age 25 is “young.” I’ve talked about being an “older bride” at 30 and many people have scoffed at me because they don’t think that is old. But when at 30 you know many people who have more than 3 kids in their own marriage or they have been married almost 10 years it’s no wonder I feel like an older bride.

Maybe it just depends on the circles you travel in. In secular circle’s it seems people are older (like close to 40) when they get married, wherein Catholic/Christian circles people are younger. Who knows. We can’t help when we get married and how old we are.

I read in a wedding forum last week about a woman that was 45 years old and planning her very first wedding. She wanted to have a big wedding (like 200 people), with a ceremony and all the first dances and the whole shebang. She stated that she felt ridiculous for wanting that at her age as most people her age if they got married were basically eloping, having destination weddings, just going to the courthouse or having VERY small ceremonies with 20 people or less. Granted I’m sure they were mostly 2nd marriages and that is basically what people do for 2nd marriages.And then she felt bad because she felt that this wedding should have been 12 years earlier. But guess what. That didn’t happen. God didn’t bring her future husband into her life until now. And that is OKAY. There is NOTHING wrong with you because you get married late. I HATE this awful self-talk that we have that if you don’t get married by

And then she felt bad because she felt that this wedding should have been 12 years earlier. But guess what. That didn’t happen. God didn’t bring her future husband into her life until now. And that is OKAY. There is NOTHING wrong with you because you get married late. I HATE this awful self-talk that we have that if you don’t get married by a certain period of time that God “hates us/doesn’t answer our prayers/we’re broken.” I think that is why we should be teaching people to pray for a vocation whatever that may be. My friend, Arleen Spenceley actually writes about this in her book and in some of her blog posts go check them out.

I really felt for this lady on the forum. No I’m not 45 I’m only 30 but I can remember being 22 (which was over 8 years ago) and all my friends I knew in college were getting married. In 2010 I went to 4 weddings and a funeral. Yes, my life was a movie. And I was happy for all those people but I kept wondering when will it be my turn?

God’s timing obviously isn’t always how we like it but in time we try to become at peace with the places that God takes us and how he answers our prayers. I don’t think I could have handled being married in my 20s. But when I was that age I didn’t think that but looking back I’m glad I’ve journeyed through my experiences in the order I did.