We’re almost done with Paris guys! Today we’re off to Notre Dame Cathedral! One of the most famous and iconic churches in the world!

When I was little the movie The Hunchback of Notre Dame came out and I’ll be honest I had no idea that it was a catholic church..or even a church that they were referring to in the movie. I never really cared for the movie to be honest.

The Cathedral has guided tours throughout the day and we intended to go to the afternoon tour but the line to get into the church was down the block so we ended up missing it. Instead we went back later and attended the Saturday vigil mass at Notre Dame while we were in Paris. 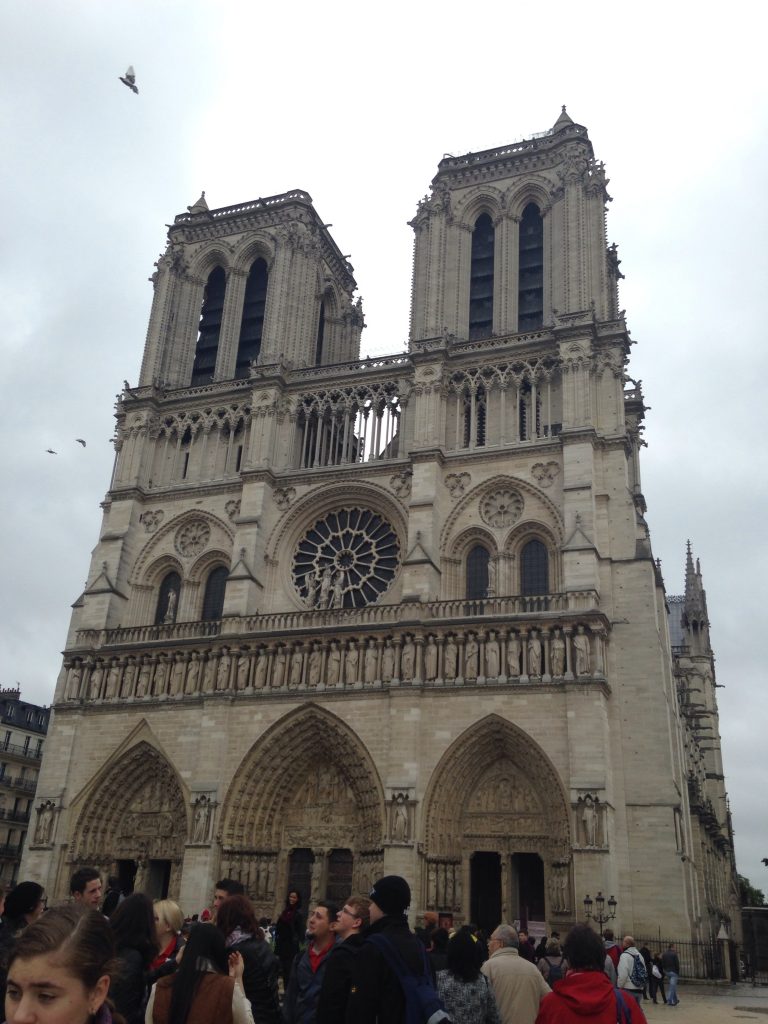 Before visiting France I had never been to a Gothic Cathedral before (at least not that I can remember) and the details on it were so beautiful. 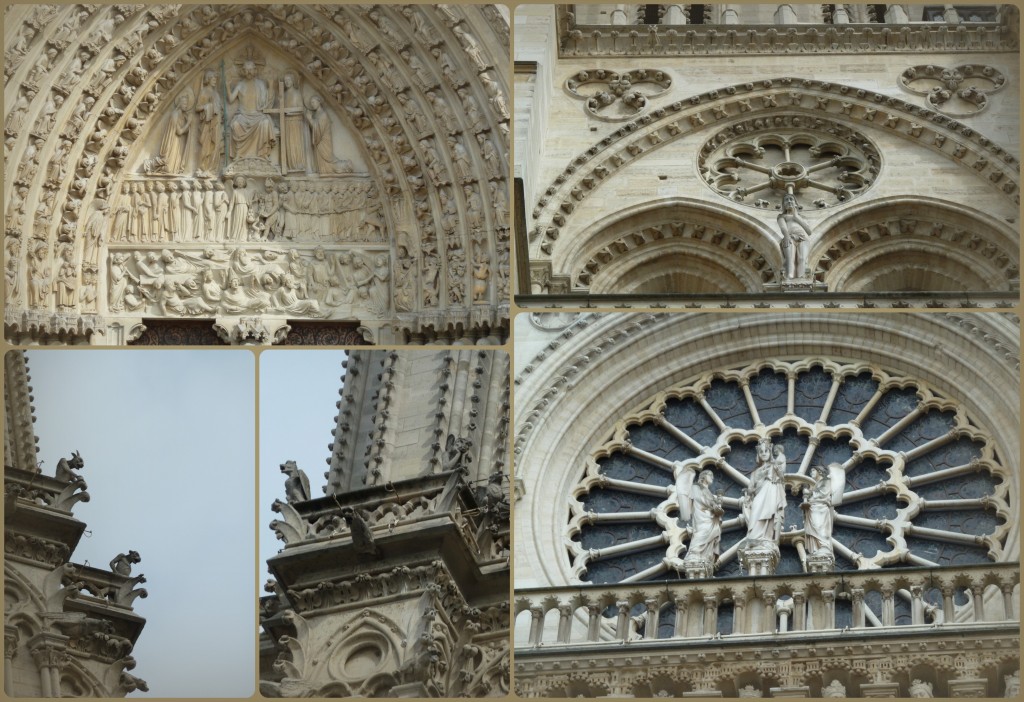 The Gargoyle’s really are up in the bells of Notre Dame just like in the movie!! You can walk up to the bells but we didn’t do that. Once we stood on the SUPER long line we finally got inside and walked around before mass started. The interesting thing about Gothic Cathedrals was they had all these mini altars along the sides. I noticed the same thing when we visited Lisieux. 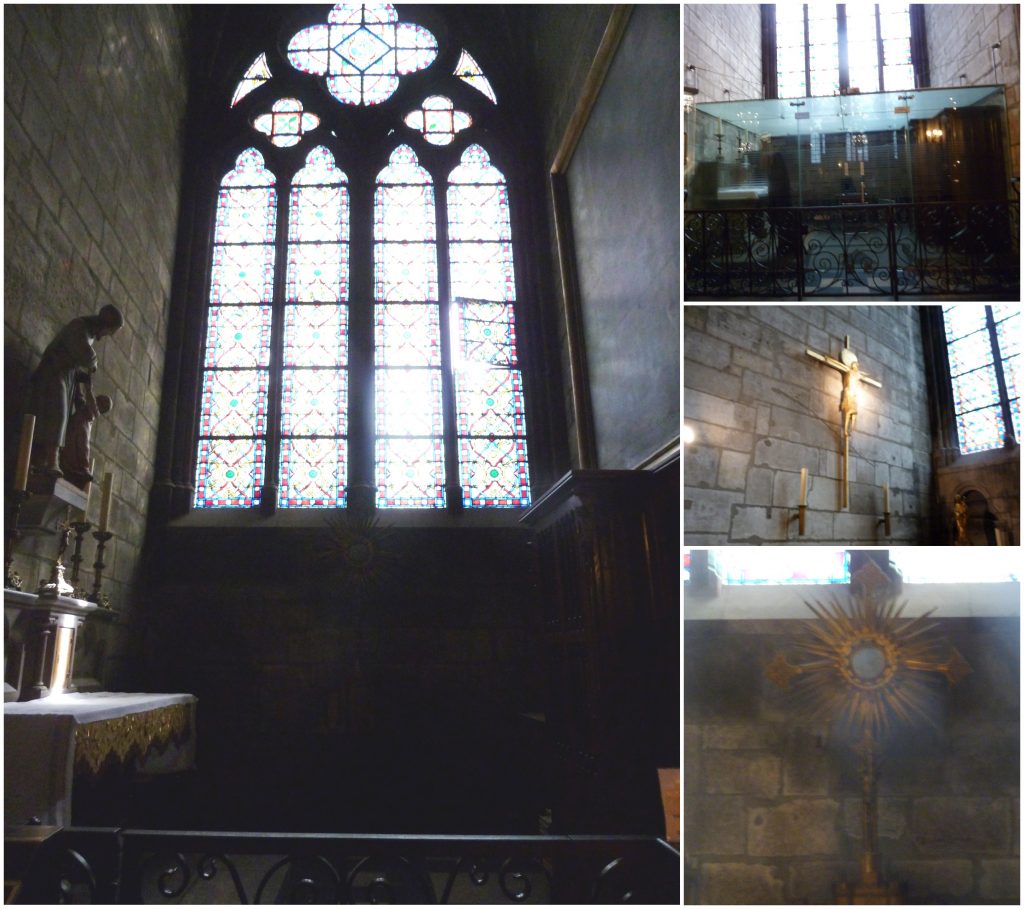 Until I started looking at my pictures I don’t ever remember noticing that Eucharistic Adoration was set up in this side chapel. So that was kind of cool that it was set up even though I never noticed. 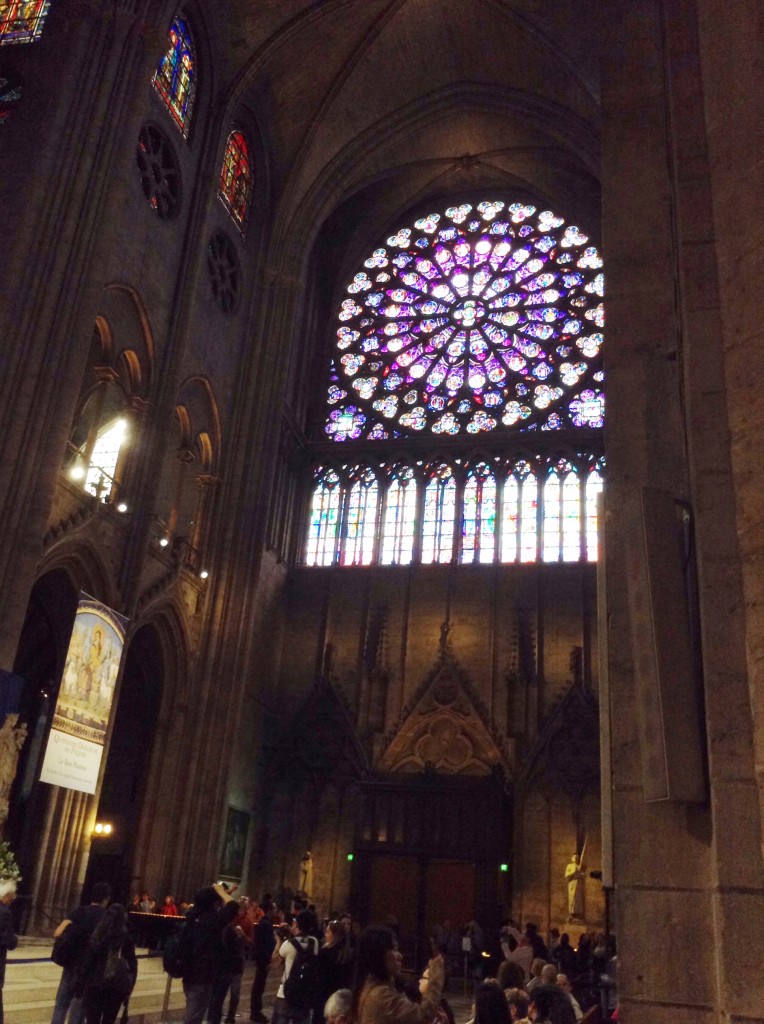 I loved all the detail on the stained glass windows. 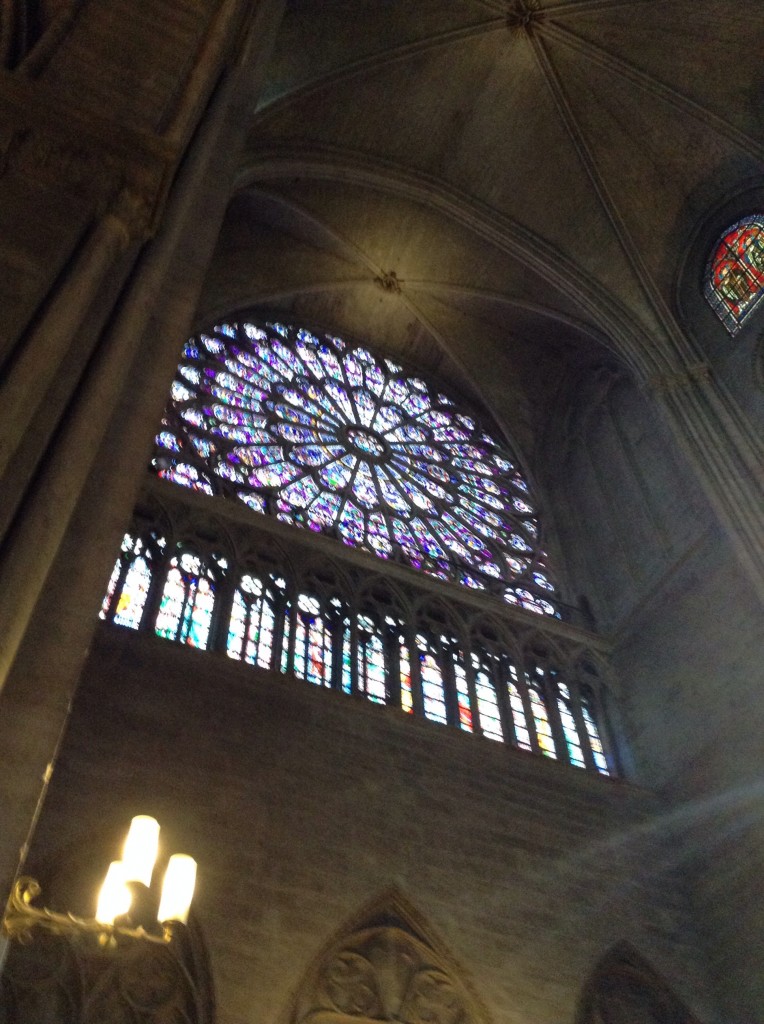 Before mass started they did vespers which meant they brought out the incense which was really cool to see in this famous cathedral. 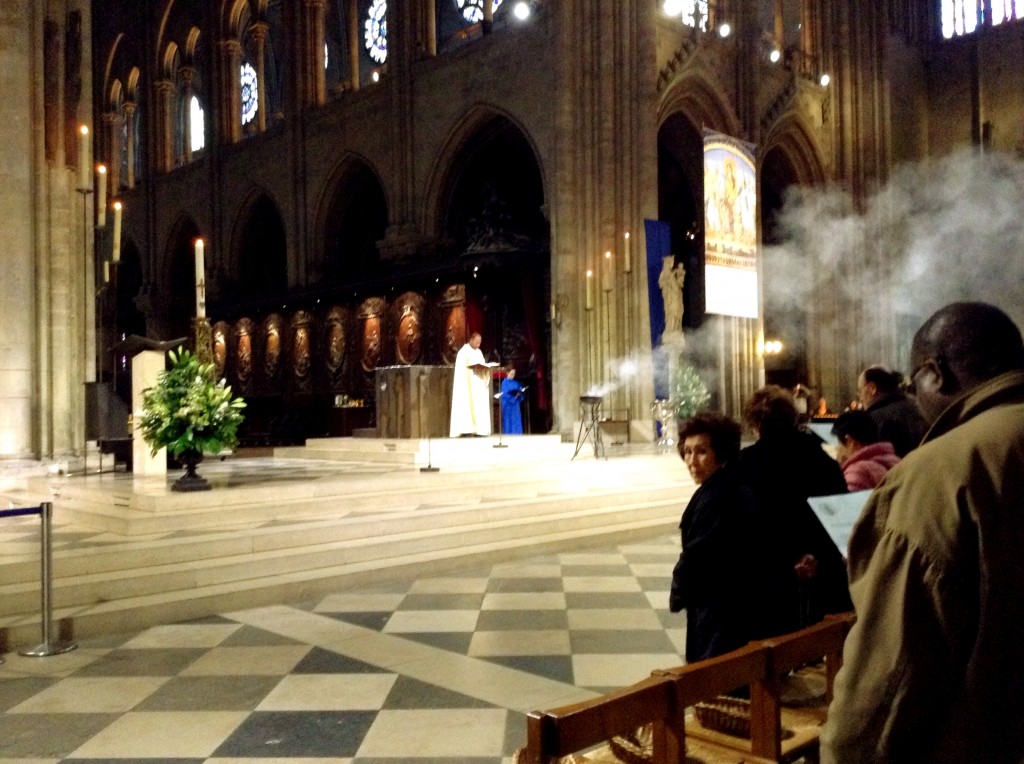 My pictures from inside the church didn’t come out that well since it’s dim and you can’t use flash.

Another blurry photo of the Pipe Organ. 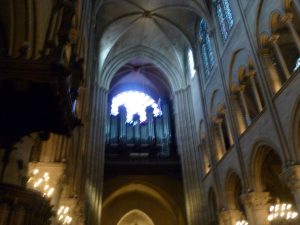 We didn’t get to explore behind the altar because it was closed after mass was over but what we saw was beautiful. Even the outside of the church was so pretty. Mass of course was in French but I have an app with the readings and otherwise knew exactly what was going on (minus the homily). I love that about our Faith! 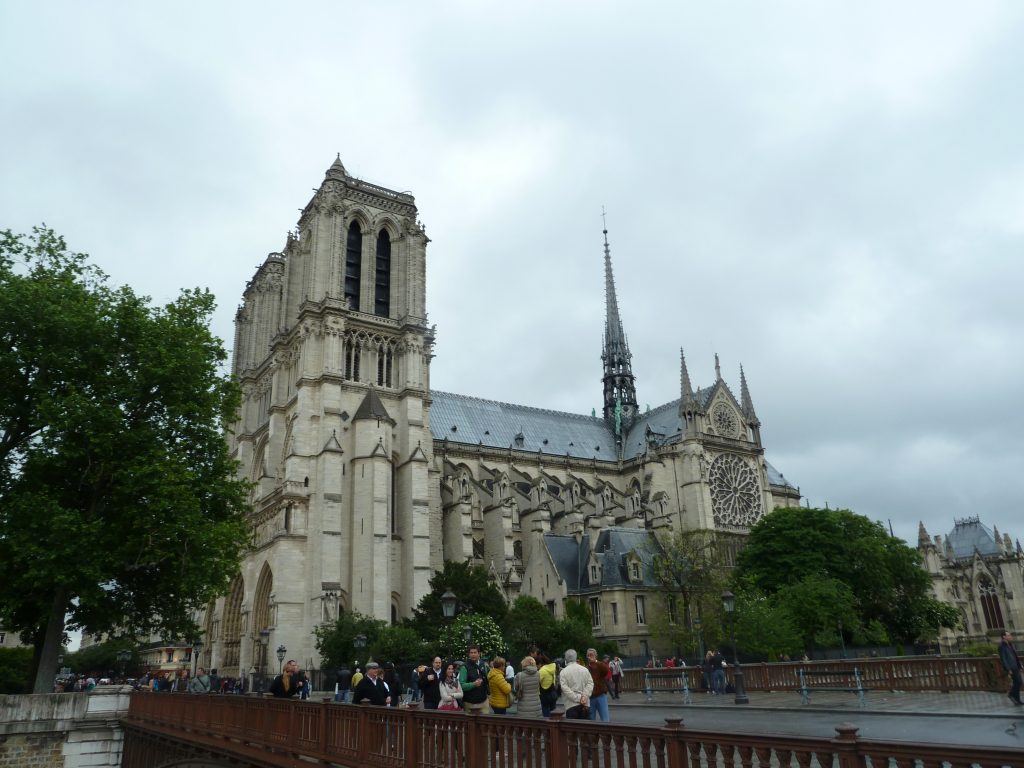 Tomorrow is one of the last days I’ll be talking about Paris and we’re off to the Eiffel Tower!! If you need to catch up on my other 31 Days of Europe posts you can go to my landing page!