DAY 1 of the 31 Days of Blogging Challenge has come and gone and it’s way past midnight and I’m just now sitting down to write days 1 post. I can say I was actually pretty successful today in terms of updating my Dad’s website. But I am just slow in getting this post written for you guys. Today I am going to give you a little back story on this project.

My dad passed away in 1994 (when I was 8 and really way too young to properly understand or grieve). A few years ago I was trying to decide what I could do to help grieve and heal besides just journaling (which honestly gets old after awhile). I thought well I have a blog and enjoy doing that so I should make a website. My Aunt had sent my mom something YEARS AGO about these memorial websites that people were making for deceased loved ones but we weren’t really ready to do it just yet.

In starting this website I started doing some online research. AKA internet stalking my dad’s name via google. The things that my sister and I found were INSANE. [More backstory..my dad was a high school biology/science teacher and he directed all the school plays.] The first thing that comes up when you google his name is this RateMyTeachers website with teacher reviews. Mind you the internet wasn’t really out when he passed away and I doubt this website was. According to the reviews on this page there are two reviews from 2005 and 2011. 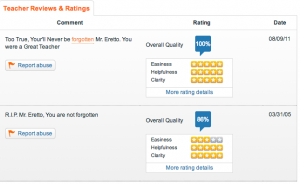 Another thing that we found was an actress that had been performing in several off-broadway shows in NYC was interviewed on a website. One of the questions was, “Who influenced you the most?” or something similar and my dad’s name was mentioned in the interview. I still need to email her to see if she will provide a contribution to the website.

I think by far the craziest thing about this whole project has been this. Last week I started thinking about the #31 Days of Blogging challenge and what topic I should do…and how I really needed to work on this website and get it off the ground. So I took the plunge. Made a button. Wrote up an intro post. Even started thinking about what I should write about on the site and what kind of pictures I should be looking for. I even created a beautiful timeline photo for this Facebook page.

As all of this went down over the weekend something else went down. The class of 1993 had their 20th year high school reunion. While that went down they were all talking about my Dad at some point during the evening. Then someone (or lots) of people went home and googled my dads name and found the Facebook page for the site (I know one person did this because they left a note on the wall and told me).

Well on Friday night the Facebook page had 10 likes…..tonight as I type this it has 64 likes!! It has more than tripled in 3 days! I was floored when I got up this morning and noticed how much it had grown. Especially since the page has been pretty dormant over the past few months. And especially because as so many bloggers know the reach on Facebook pages lately is not doing it’s best. I’m sure tomorrow when I wake up I’ll have even more likes. And I hope it keeps growing as time goes on so that many people to come will come to know and love the man that I called “Daddy.”