SO remember last year we did this crazy challenge…we blogged every day for 7 days….well it’s back again and I’m back again for the challenge!! Back in October I did 31 Days of Blogging…and I blogged EVERY SINGLE DAY of OCTOBER about a specific topic..my dad.

This challenge should be a bit easier we can blog about……WHATEVER WE WANT…and the different posts don’t have to be related at all and we can even do link-ups…which a lot of my posts are going to be because there are a TON of link-ups going on this week!! I may even post more than 7 posts (I’m scary). 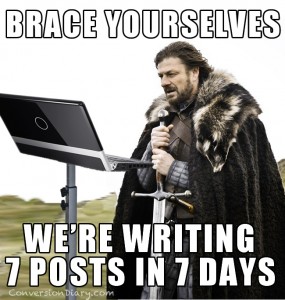 So today’s post is going to just be a brain dump. Basically random stuff that is in my brain that I want to write down. A nicer word would be…housecleaning/housekeeping.

SO LENT STARTS NEXT WEEK!! No kidding….about time since Easter Candy has been in the stores for about 2 weeks already. It is actually pretty amusing in my Catholic Facebook Groups. Everyone is freaking out and trying to think about what they want to do for Lent and brainstorming ideas. It’s actually a really cool community building activity. When I was younger everyone kept their Lent ideas a secret…well until the first Sunday of Lent when everyone failed at whatever they were doing for Lent. So here are some of the things going on with me during Lent:

This sounds like a good time to plug my awesome LENTENT MEAL PLAN LINK-UP: 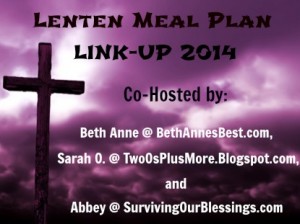 My button for the link-up what do you think? I can’t decide if I like it or not…it’s still a work in progress…

This year I have the wonderful Sarah O. and Abbey joining me as co-hosts. I have also gathered a ton of DELICIOUS recipes from other bloggers that I will be sharing with everyone. The link-ups will be posted every MONDAY starting next Monday March 3rd and the last one will be Monday April 14th (which is the beginning of Holy Week). To check out the last few years of posts you can go here.

Also during Lent I am going to be posting daily quotes from a combination of sources. Right now I’m thinking about doing Saint Quotes, Catholic Quotes, and Bible Quotes. Some days I might just do words and other days I might do photos with the words on them..and to keep things crazy I may do BOTH some days………I’m a rebel.

Because I like doing things backwards and add things to my plate during Lent verses giving things up….every week of Lent I am going to be hosting a GIVEAWAY!! I have a TON of books and CDS and other SWAG that I have gotten in the mail and conferences the past few months that I want to give my extras away to my awesome readers!! Say stay tuned to that. Can this count as my Lenten Almsgiving? Just kidding…..

Personally though I want to try and go to adoration AT LEAST once a week. I’d like to try for twice a week but I’m going to shoot for once a month as March is going to be a crazy month between moving and my sister’s wedding and the only adoration is M-F 9am-5pm and I work those hours half the week. I also want to try and read Rome Sweet Home during Lent. I got it for Christmas and have heard awesome things about it and everyone says great things about it (it’s also one of the books I’ll be giving away).

MILO UPDATE: Remember my cat Milo that FELL OUT OF A TREE?!!? He seems to be doing MUCH BETTER. When we’re home we let him out of his cage to walk around. He just limps around on 3 legs the poor thing. But he hasn’t really learned his lesson he still sits at the door wanting to go outside…silly kitty. He’s cute though at night he’ll get tired and just goes back into his cage and goes to bed. He goes back to the vet soon so we’ll see what happens. 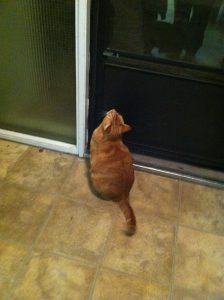 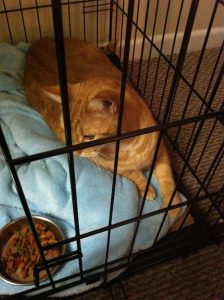 One of the things that Jen posted when she introduced this challenge was to clean out your drafts folder. I like that idea and I think I might just do that. I have a bunch of half-written posts that I want to figure out how to finish off. A few of them are some-what controversial and I haven’t been able to figure out how to write them without making a ton of people angry. They have really been on my mind lately and I want to post them but I’m really struggling with the words. One is about stewardship and another is about introverts.

That is all my brain has for now see ya tomorrow!!