Your text here. Are you still using swagbucks? Last week I realized that you can earn swagbucks by SHOPPING ONLINE!! I shop online all the time! In the past I have used Ebates to earn 5-15% back. Last week when I was buying something I actually earned more in swagbucks than the lousy 1% the store would give me. Alas you can only earn swagbucks for buying CERTAIN things on Amazon (same with ebates). I wish there were cashback programs for amazon but I guess you are already saving a lot by shopping there.

I’ve been pretty active on a finance forum and have found a lot of the debates about “tithing” really interesting. Most people who tithe..tithe and they won’t change the amount they tithe no matter what you say..which is good. But I love all these “Non-Religious” people who try to change their minds and just say well if you don’t tithe no big deal your pastor makes less money that year. All I can think is if your boss told you you were getting a pay-cut I don’t think you’d be very happy about it so why should our pastors have to put up with that?  One lady went as far and told me that she’s been to cathedrals and the vatican and “they are gorgeous churches and obviously aren’t hurting for money so why bother” I basically told her those churches are beautiful due to the donations of the faithful. Everyone is entitled to their opinion and they don’t have to believe what I believe but I hate people that go around and talk negatively about people that are faithful.

So last week my car was on the fritz and several days since then I kept having issues trying to get my car to start. So Sunday we went to the Toyota dealership to “test drive” some cars and I came home with this: 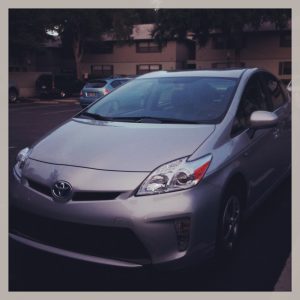 A Toyota Prius! I LOVE it! It gets about 45mpg (give or take)! I can’t wait to take a road trip to see how much I save on gas. I spent more on it than I really wanted but I know it’ll last me a good 200,000+ miles or 10 years or until I get to kid #3 and need a bigger car. It doesn’t have all the fancy features I wanted like satellite radio and a navigation system but it’s 100x nicer than any car I’ve had and has the hands free stuff for my phone. But I’ve found some cheaper ways to get the things I wanted so it’s a win-win in my book.

School started this week and man it was OVERWHELMING…all the printing and saving for some of my classes was crazy. I think I got a handle on things and am going to make myself a schedule of what I will work on when. I also am going to hang out at the library and starbucks a lot as I get really distracted at home (even though 90% of the time no one is home and yes I know that sounds ridiculous).

The place I work has a lot of different things that go on. One thing we have is an IMax Theatre. This week we got 2 new documentaries and yesterday afternoon they had a free preview of them for the staff as well as free soda and popcorn. Since I don’t work on Thursdays my mom and I drove up there (they said you could bring a guest) and went and saw them. One was about sharks and the other was about Tornados and Storm Chasers. I thought they were going to be boring but they were really interesting. Maybe because they were in 3D it seemed to be more entertaining hahaha

I haven’t talked about Milo and Pierre in awhile and they must know because today Pierre sat on my keyboard and opened about 100 versions of MS Word that I’m STILL trying to close. Pierre also thinks the food in the container isn’t the same as the food in his bowl (he’s wrong it’s THE SAME!!!!).

Your text here. Thanks to everyone last week that gave me suggestions on recipes. I found this app called “Evernote Food” for my iPad and it goes into your Evernote and finds all the recipes. I have the Ever web clipper in my chrome browser and have been “clipping” recipes this week as I see them and saving them in my “Recipe” notebook. So far so good. We’ll see what happens in the coming weeks.

Back to School Backpack #PayItForward Event!
Fun Facts About Me for my Allume Roommates