It’s inevitable that we will plan our friends bachelorette parties at some point or another, but how do we make them fun without all the raunch? Give us your ideas for fun things to do with a bridal party without all the crazy.

So God  is HILARIOUS at the timing for this post. I’m in the midst of planning my sisters Bachelorette Party and Bridal Shower. For my sisters Bachelorette Party I came up with several ideas. First I had found a ghost or pirate pub crawl. You get to hear about the ghosts/pirates that were found in some bars in the city and got discounts on drinks. I figured those that didn’t like to drink would still be entertained and I wanted to do a scavenger hunt. Then I realized well maybe I need to ask my sister if she has any preferences of what we do. Unlike what most people think about Bachelorette Parties being a surprise to the bride I really dislike making the bride uncomfortable weeks before her wedding.

Our circumstances are also a little different. All of our family and friends and bridal party live out of state so we’re about to have a marathon wedding with everything within 3 days of each other. It really wasn’t feasible for people to come into town for the bachelorette party/shower months before the wedding so from Wednesday to Saturday we’re going to be busy with wedding events. Not as many people will be in attendance because of all the out of town guests but we’re determined to make the most of it and have fun with the people that will be there!

In the end my sister decided she didn’t want to go bar hopping or do much of anything that would entail a ton of drinking. This especially became clear when one of her bridesmaids kept going on and on about how the point of the bachelorette party was to get the bride as drunk as possible. My sister made it clear she DID NOT want this to happen…especially 3 days before her wedding (I don’t blame her there).

So I had to do some more research of what we could do that would be FUN, affordable, and entertain everyone. I thought about doing a regular ghost tour but for a private tour you needed 20 people and I knew we wouldn’t have that many girls.

Finally I remembered about the new place in town Painting With A Twist!! They kept coming up on my newsfeed and I had a friend have her birthday party there recently. So I sent them an email and asked if they did Bachelorette Parties and they said they did! So I asked my sister what she thought because she had talked about going several months ago and we never got around to it. She thought it was a great idea and I went ahead and booked it! 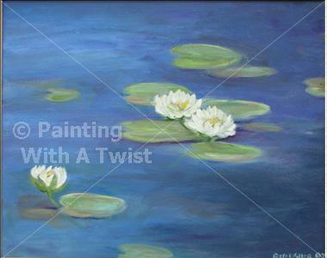 Picture We Will Be Painting

I was also able to find some SUPER CUTE invitations on Shutterfly that said, “Lets Paint the Town” and went PERFECT with our Painting With A Twist Theme. One of the issues I was having is that I couldn’t find any invitations that I liked. They were all really raunchy and I didn’t want to give off the wrong vibe. Before I found these I thought I was going to have to make my own. Also thanks to Shutterfly’s amazing deals they were only $6!

Between the Bridesmaids, family friends, cousins, and work friends we were able to come up with enough guests for the Bachelorette Party. The Bridal Shower has been a little more difficult. A lot of people haven’t RSVP’d and with me being the only person local it’s been a difficult struggle. I had originally booked a room at the neighborhood hall but we decided to just have it at the house we’re renting since that is where 80% of the people attending the shower will be…and we’ll just send the boys somewhere else for dinner. It will also mean less running around in the craziness.

Even though not a lot of people will be there and it’s a little disappointing I think it’s going to be a fun time. This is my first time in a wedding and planning showers or really ANY PARTY and it’s been stressful at times but fun as well. I’m really looking forward to seeing how it all goes down in 20+ days! I’ll be sure to write an update of how it went.

See you next week…our topic is Why Not Both? Married and singles being friends.