Yesterday I recapped my visit to Athens. Today we are off to the island of Santorini. Santorini was the second city in Greece we visited. It is a very famous island that is featured in a lot of movies including the Sisterhood of the Traveling Pants.

We were supposed to take a speed boat to get to and from Santorini but since the boat staff was threatening to strike (since it was May Day) so we flew to Santorini instead. Since we flew we ended up getting to our hotel in Santorini by 10am and had a free afternoon since we originally weren’t supposed to arrive until 3pm. 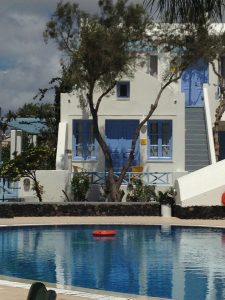 That night we went into the city part of the island for dinner. It was SUPER WINDY. We had some free time before our dinner reservation so I took a walk around and found the Catholic Cathedral of Santorini. While I was there I picked up this flyer that talked about all the churches on the island. It was fascinating to read this tiny island has over 300 churches! INSANE! 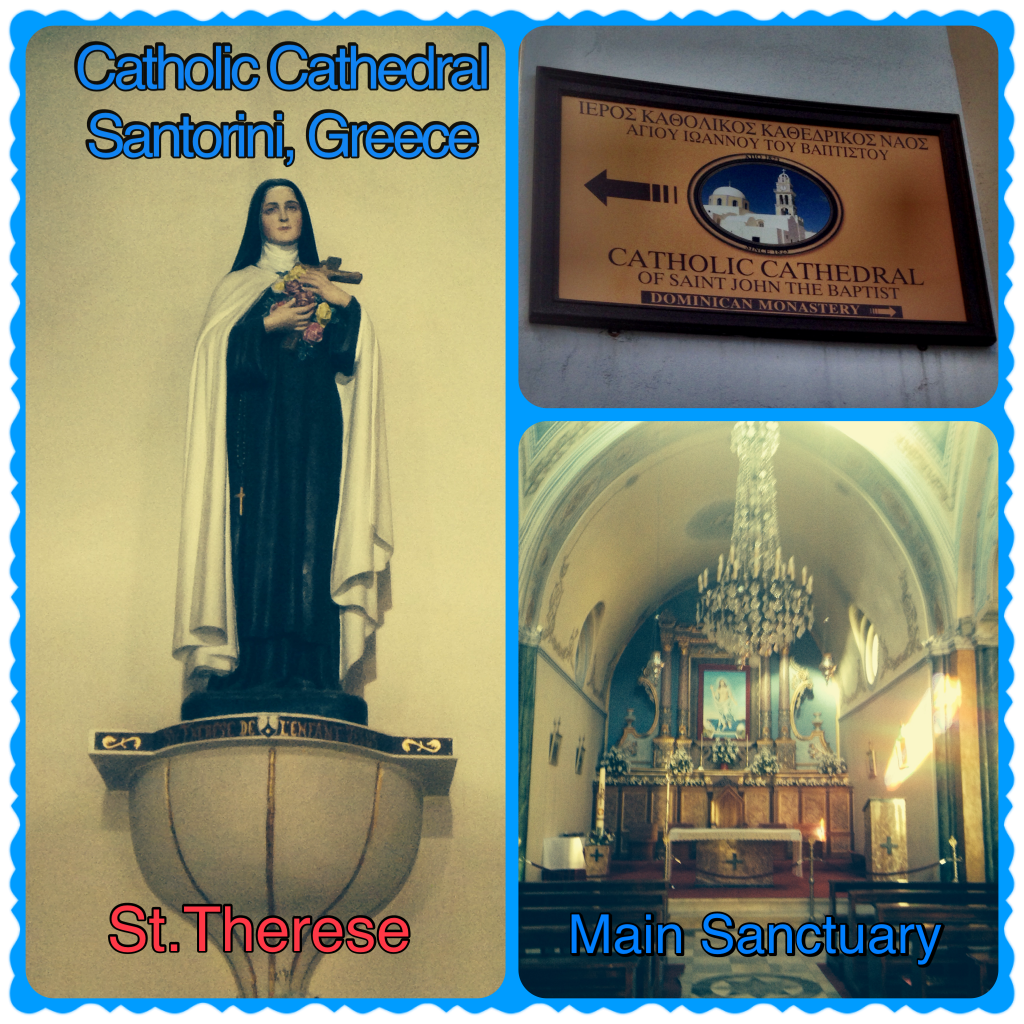 I was able to go inside the church and light a candle which was really cool. After my adventure I went to meet my classmates for a delicious dinner and sunset. 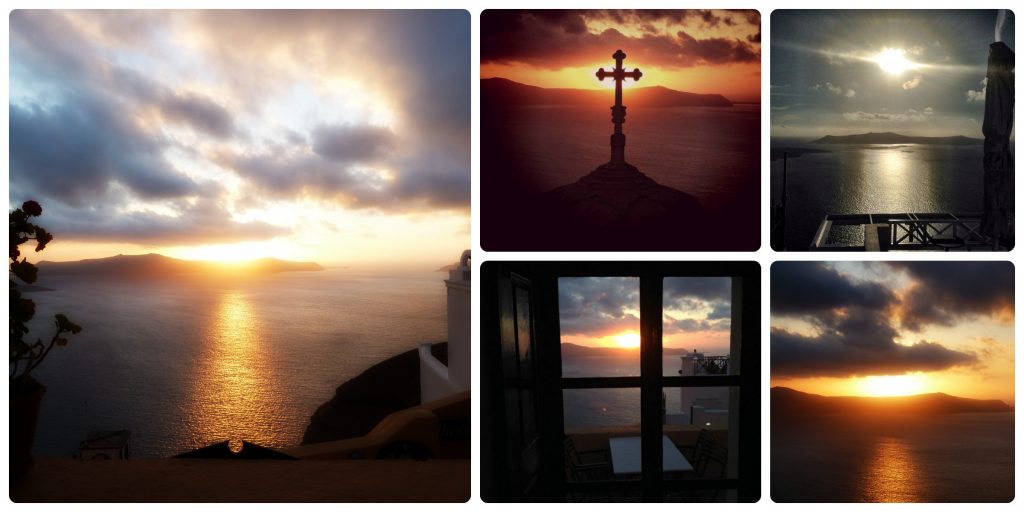 The following day we did a lot of different things. We took a boat ride around the entire island and you could really see the different layers of the rock. The nerd in me thought this was really cool. I even posted a picture of facebook and my mom made a comment about all the layers and colors. That’s the only thing she remembers from Geology. The boat also stopped at a dormant volcano near the island. 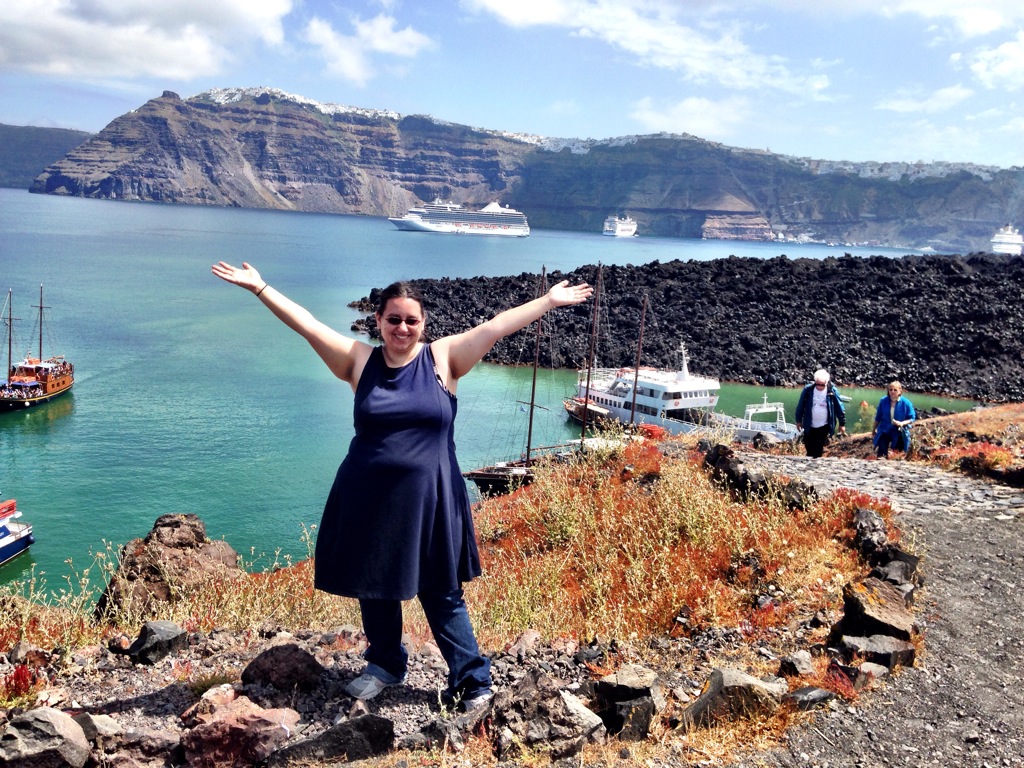 This is a “on top of the world” picture I took on the dormant volcano. You can sort of see behind the different layers of the rock.

When we got off the boat we had to climb up “200 steps” yeah right it was more like 2000 so we took donkeys up the steps instead. Then we had to walk 200 steps. Man that was a workout! 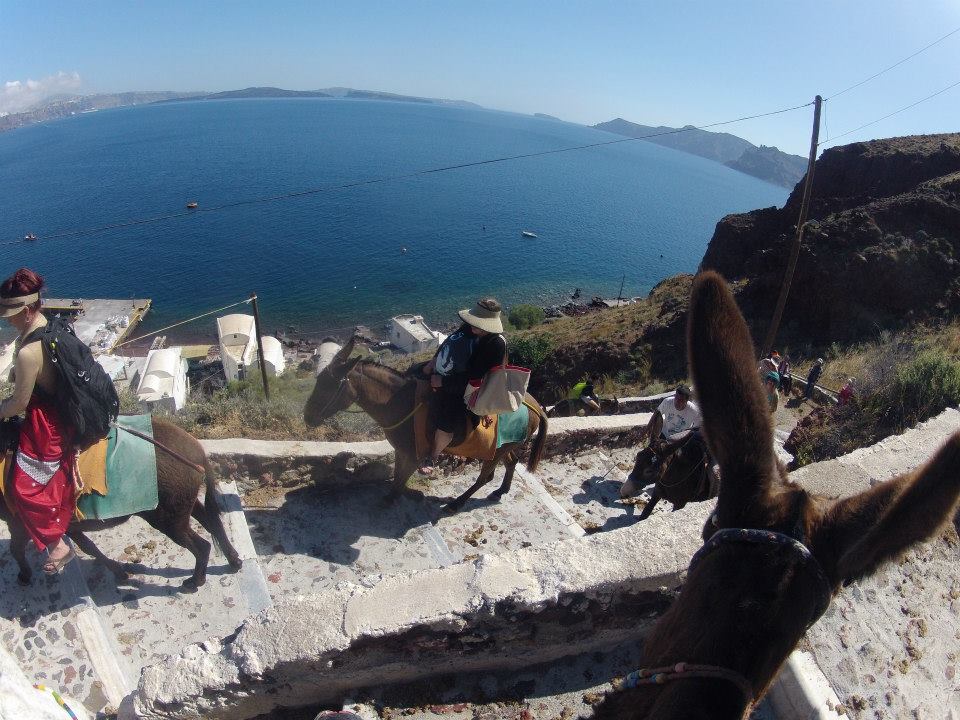 The following day we visted an Archeology site and a museum of the artifacts found in the site. It was really cool to see the two things and connect them. It’s an active archeology site and they are still researching what they are finding. 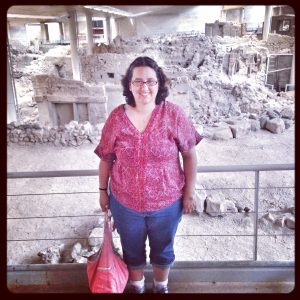 That was our last day in Santorini. The following day we had a free morning. Most of us just relaxed and stayed close to the hotel. It was Sunday and I really wanted to go to mass but that meant taking a Taxi by myself the 10ish KM into the city and I didn’t feel comfortable doing that and didn’t want to risk getting lost and missing the ferry so I stayed at the hotel and read the mass readings and prayed instead.

After our free morning we headed to the dock where we would catch the ferry. We ended up taking a slower ferry back since we ended up having to fly to even out the cost. So we didn’t get to our hotel till midnight. It was a long ride but it was fun to not have to do much.

I also want to note that when we were in Santorini our hotel had NO WIFI. It was a long few days until we found a restaurant the 2nd day that had wifi. It wasn’t that big of a deal but for some of the students this was the first day they ever left the country or were away from home. It’s just kind of comical how we were all kind of slightly freaking out about it…slightly…it was funny I talked to my cousin when I got back online and she was all “oh I was wondering why I hadn’t heard from you in a few days….”

The next day we were headed to our final destination of Delphi, Greece! If you need to catch up on my other 31 Days of Europe posts you can go to my landing page!