What’s in a name?!!? There is a name link-up over at Team Whitaker! I don’t have kids but I want to write about MY NAME and my sisters name!

Yeah I’m that girl that has a TON of names picked out for potential children:

I have NO IDEA if any of these names will EVER get used. I really would like to name a son Salvatore and a daughter Sally (or at least middle name) in honor of my Father…but only time will tell.

The story of how my sister and I got our names is pretty unique. Many of you probably don’t know as I don’t really mention it but my real name is Elizabeth Anne. Why? Because my Father was a very devout Catholic and ADAMANT that his children were all named after SAINTS…and so that we have “baptismal” names at baptism. My mom tells me stories how they fought for MONTHS arguing over my name. She wanted to name me Bethanne but there is no ST. BETHANNE (maybe I will be the first!) it comes from Elizabeth blah blah blah. So they named me Elizabeth Anne after not 1 but 2 saints.

It took several years for my mom to get pregnant with me (I’m the oldest). Right near where my mom worked was a church called St. Elizabeth Ann Seton and she would go in that church on her way home/at lunch time and pray for a baby. My Dad also liked St. Anne (Jesus’ grandma) so my middle name came from her name. My Dad HATED the nickname Lizzy so in the end they just always called me Beth Anne from birth so no one had the chance to nickname me Liz or Lizzie. And forever the name no one knows how to spell was born.

A few weeks ago I met a girl (about 10-12) and her name was Anne. I introduced myself to her and her Mom. Her mom asked me if I spelled my “Anne” with an “E” and I said YES! I then asked the little girl how many people spell her name wrong and she just laughed. It’s okay it is what makes us unique.

My sister’s name is even more interesting. Her name is Stephanie. Again my dad had to make sure there was a St. Stephanie. Everything they found said that it was a derivative of St. Stephan but once again that wasn’t good enough for my Dad. Now this was before google or the internet so this kind of research was much more difficult. My dad went to these cloistered nuns in New Jersey (how he knew these nuns would be able to help him I have NO IDEA) he told them they were looking to find out if a St. Stephanie existed. Since they were cloistered he couldn’t go in but they took down his information and told him they’d do some research. No kidding a month later they get a letter in the mail with a paragraph all about St. Stephanie with some saint medals.

We tell these stories to people all the time and many people think my Father was crazy but that was just the way he was. He did many crazy things in the short time I knew him and I’m sure many others that are still floating around.

So there you have it how our names came to be. I think it’s so important to have fun stories behind names and to tell children why you picked their name and the saints behind them because it’s good to have faith-filled role models to look up to. 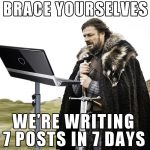