When I first saw the list of Catholic Spakers that were on the list for Brandon Vogt’s Support A Catholic Speaker Month 2012 I was in awe. So many great speakers, writers, and Catholics in general. So many of them I’ve read  articles about, books, heard them speak, or listened to their music, etc. When I went through the list of who I wanted to blog about I chose the very FIRST Catholic Speaker I had ever heard. Way Back in 2002 when I went to The Pines Catholic Camp I happened to go during the week that Steve Angrisano was there so I chose to blog about him. 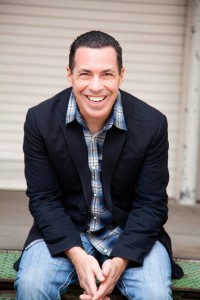 I’ve heard Steve speak and perform a million times since that first time and every time I would get something different out of it. Steve is an awesome story teller. I remember when I heard him was at NCYC in 2003 my sister was with me and he was talking about Faith and he made my sister cry (which can be hard to do) since she isn’t as passionate about the faith as I am.

That week at the Pines really changed my outlook on the Catholic Faith. Until then I had never heard contemporary christian/catholic music. I thought church music was all boring and most weeks I went to mass to go through the motions and couldn’t wait to get out of there.  After that summer I started going to church with a friend who belonged to an active Lifteen parish and I really began to grow in my faith. I’d like to think that hearing Steve Angrisano story-tell,  speak, and sing that week at The Pines really started my faith journey to where it is today.

A few years after I graduated college Steve actually went to my former college and performed at our Praise and Worship night! Here is a video I found on youtube of it. It’s kind of corny but I liked how they included different views of him of people that have heard him and people that haven’t along with an interview of Steve and some of the performance.