The Twenties….defined as the ages 20-29. Such a strange time of life. Most people at age 20 are in college…and most people at age 29…well they are all over the place. Back in the day were usually married with a few kids…but today…not so much.

Today kids in their twenties (especially late 20s) range from just about everything from people with no debt to people with TONS of debt. People with no jobs, jobs at Starbucks, to fancy “career” jobs at firms they went to college dreaming about working in. Married with kids, Married without kids, or Single with or without kids.

For the last several years I felt like everyone in the world was the latter. EVERYONE was working their “Dream job,” living in a fancy apartment, didn’t have any debt, going on fancy vacations, and not relying on their parents for anything. Then there was me. Very underemployed (or unemployed), living at home, and still needing my Mom’s help just to get by. I’m almost 28 years old and this is still my day-to-day. I even went back to school last year not because I wanted to but because I felt that it was the only way for me to get a job that would pay me living wage.

Then sometime in the last year I came across Paul’s blog. I poured through the archives and found tons of other people like me. Un/underemployed twenty somethings still trying to find their place in the world. I felt like he was writing right to me. His famous post 21 secrets for your twenties is the post that really helped me feel that I wasn’t alone in this world. I subscribed to his blog and kept reading. A few months later I found out that he was expanding the post into a book called 101 Secrets for Your Twenties. And about a month or two before the launch he wrote a post asking for people to promote his book/review it and knowing his large fan base I applied on a whim and was ecstatic when I was chosen and received one of the review copies after so many more awesome bloggers than little old me were also chosen.

I’m a slow reader so it took me awhile to read the book. I soaked up every tip and highlighted the book like crazy. Thanks to my kindle app it told me I had over 150 highlights. The book is full of fun and useful tips and scenarios that anyone can relate to. It’s a really fast read with a nice graphic for each tip.

Two of my favorite tips were the following: 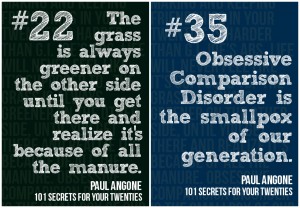 #22 & #35 is one of the best tips in the book. It goes back to my love-hate relationship with facebook. I love how it connects me with family and friends I would probably never talk to otherwise but I HATE how in your face peoples lives are and how down it can sometimes make us feel about our own lives as you really only see the good awesome things and never the bad. When was the last time you saw someone post on facebook they got fired? Probably one in 100 people do this. I’ve also heard that sometimes you just WON’T want that persons life no matter how awesome it looks. 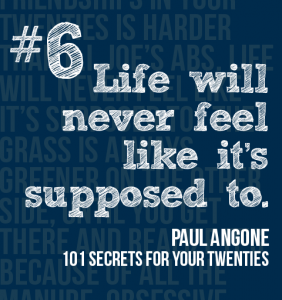 Tip #6 was another tip that REALLY  resonated with my life. Life is NEVER EVER going to feel like how it’s “supposed to” I think “supposed to” doesn’t even exist..it’s something our brains dream up but may never happen in reality. But that is okay. I think as people we need to set goals and dreams for ourselves to try and obtain but if we never get to those dreams or goals it’s okay!! God has a plan for everyone and only he knows where we will end up. When we’re in the trenches of everyday it’s hard to see that there is a light at the end of the tunnel and that things will be okay down the line but it does and it will.

The best part of Paul’s book is at the very end he gives you some tasks and goals on how to get to the goals that we have set for ourselves. They are very realistic and not overwhelming at all.

In conclusion this book is great for any 20-something or even 30-something who is struggling and life and thinks that they are alone in the world (but they really aren’t). This book seriously changed my outlook on life and made me think about my goals and was my first step in following my dreams and obtaining goals.