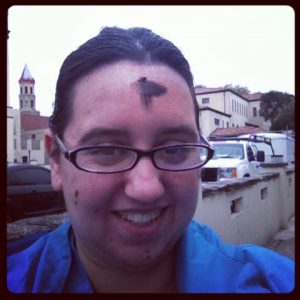 For Lent this year I’ve decided to turn off my facebook and twitter notifications on my phone. It’s been an interesting two days. Sometimes I’m really curious as to what is going on in sm and other times I’m like man this is nice. Sometimes I would get a notification and feel the need to rush to social media to respond. I think I felt if I didn’t I would forget or miss something. We’ll see how I do. I also want to get to adoration 1-2 days a week. We’ll see how I do with that as well since adoration is only from 9-5 so I’m limited to when I can go.

Speaking of LENT it’s Friday and Catholics can’t eat meat today (unless you have a health reason)! You read it so now you know! If you are in need of some meatless meals head on over to my awesome Link-Up!! We have a TON of recipes linked already and more to come! We’ll be posting new recipes every Monday of Lent. I have collected over 30 recipes to share so make sure to come back every Monday. Also if you have old recipes/posts you can link those as well they don’t have to be new 🙂

The last two days I have been listening to a lot of Busted Halo on The Catholic Channel. Obviously there have been many questions about LENT and Ash Wednesday! I have also learned a lot about Ash Wednesday that I didn’t know. For example ashes don’t need to be given out in a mass/liturgy setting. 90% of the time that is how they are given out but it’s not necessary. Some churches have the church opened all day and are constantly distributing ashes. My friend actually received her ashes this way…she works in a hospital and they had chaplains going around giving out ashes on and off all day. However, they highly recommend you go to a mass or at least a liturgy of the word service.

Another thing I learned was that it doesn’t matter when they distribute the ashes during the liturgy. Normally ashes are distributed after the homily. However it doesn’t have to be there. I remember a few years ago going to mass and they did it after they closed mass and thought well this is interesting but didn’t really think it was liturgically correct but apparently it is…according to Father Dave at least.

This weeks NAS series was about Bachelorette Parties. I shared what we’re doing for my sisters in a few weeks and really looking forward to it. I’m also in the midst of planning her Bridal Shower and that has been interesting being the only local person…communicating online has it’s challenges at times but we’re managing..before we know it it’s going to be here!! Less than 3 weeks to go!! INSANE!! Meanwhile I will continue collecting chalkboard themed items on Pinterest.

Yesterday was my BIRTHDAY!!!!!!!!!!!!! And no kidding on the same day I also got an invite into a facebook group for my 10 year high school reunion…way to feel old!! I doubt I will go as it would require me to fly to Texas, rent a car, and get a hotel room. I’d rather spend the money to go to EncounterSL (which I’m really thinking about going to because our diocese is willing to pay part of the cost), go on a retreat, visit my relatives, or go somewhere I like or to see people I like….but that won’t stop me from stalking the facebook group WHAHAHAHAHA

Also if you’re birthday is coming up make sure to sign up for some Birthday Freebies!!

I currently have  giveaway going on for a PRINTER!! This is a really awesome printer that comes with a special in program. Make sure to enter for your hance to win. The giveaway ends on March 16th!!

We are less than 3 weeks from having a TON of family in town, acting like tourists, throwing a bachelorette party, bridal shower, and wedding!!! It’s going to be a crazy but fun and hopefully not too stressful of a week. I can’t believe how fast the last few months have flown! I’m getting excited it’ll be awesome to see everyone and celebrate together!