And no I’m not talking about that movie. Which to this day I still have never seen and not sure I want to either…although the soundtrack is pretty good. A few weeks ago I went to Theology on  Tap that the diocese hosted for young adults and the topic was Mary. The speaker is a deacon/seminarian who will be ordained on May 31st which is one of Mary’s feast days – The Visitation.

I took some notes via evernote last night and here are the parts that I thought important enough to write down:

Bible versus that help us understand Mary:
I’m not a biblical scholar so I can’t really give a whole lot of insight on these verses but they were mentioned in the talk so I’m going to do my best to analyze them (thank you bible footnotes!)

John 2:3-5 ~ The Wedding at Cana ~ “When the wine ran short, the mother of Jesus said to him, “They have no wine.” [And] Jesus said to her, “Woman, how does your concern affect me? My hour has not yet come.” His mother said to the servers, “Do whatever he tells you.” (I actually belonged to a service ministry in college and “Do whatever he tells you.” was our mission statement.)

This one is obviously right before Jesus performs his first Miracle and Mary basically takes on her motherly instincts and tells Jesus that he needs to help these people out! At first Jesus is like no way Mom but then willingly takes over. This reminds me of how most children are to their parents today.
Genesis 3:15

“I will put enmity between you and the woman,

and between your offspring and hers;

They will strike at your head,

while you strike at their heel.”

According to the footnotes in the bible Mary was often represented as the “foot” of the serpent in Christian art. Mary is prefigured in the Old Testament here as the “her” in this is meant to mean Mary the mother of the Messiah. And that is what I’m going with here…
Genesis 3:20 ~ Eve ~ “The man gave his wife the name “Eve,” because she was the mother of all the living.”
Eve prefigures Mary here. The Matriarchs of the Old Testament foreshadow Mary and Elizabeth in the New Testament.
Here are some Books to help us pray to Mary:
St. Louis De Montfort books? – If you are interested in learning about Total Consecration to Mary he has some good books. Some of them have just prayers and some of them have prayers with explanations. I just linked to all his books as I’m not sure which are which.
33 days to morning glory ~ easier not as many prayers
One of my favorite things about being Catholic is The Saints. I LOVE hearing crazy stories about what happenned to people after they prayed to certain saints. The speaker had several really neat “Mary” stories he shared. Here are a few that I remember.
The deacon was originally a Franciscan Friar for about 8 years before he decided he wanted to be a diocesan priest. While he lived in NYC with the Friars a lot of really interesting things happenned.
Outside the Friary they had this wall with this HUGE mural of Our Lady of Guadalupe. It had been there for YEARS. However the wall it was painted on was in really bad shape. After praying, repairing, and doing anything they could they finally decided the wall had to be torn down and redone. Everyone was really sad about losing the mural but there was nothing they could do.
THREE DAYS before they were going to start construction the man that originally painted the mural SHOWED UP at the friary!! He needed some resources and wanted to talk with the friars. This man hadn’t been seen or heard from in YEARS!! When the friars told him what was going on the man said that he’d pay for the mural to be redone. So after they fixed the wall the man who worked in the business of mural painting found someone to redo it and  1/4th the cost. And here is the final product (it really is an amazing mural): 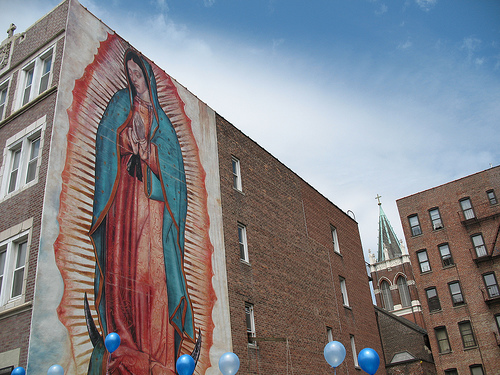 Several months after the mural was redone a rich guy in a Mercedes and Armani drove by. When he saw the mural he STOPPED in the middle of the road and got out of his car and went and talked to the friars about the mural. To make a long story short the man ended up converting to Catholicism and ended up giving away a lot of his things to the poor and I think even ended up joining the friars years later.
I thought that those were really neat stories about this one mural of Mary and just how Mary works in peoples lives. She has a very important role in everyone’s faith life no matter how big or small she’s Jesus’ mother and no one can change that.
I will leave you all with some questions. How has Mary changed your faith life? Do you have any crazy Mary stories you’d like to share? Let me know in the comments!