Now that my wedding is less than 200 days away I thought hey I guess I should finally write down my engagement story. We just took engagement photos so I am going to share some of those in between the story. I know people LOVE engagement stories so here is mine.

When I first started this blog I was a depressed single person and didn’t think I’d ever find someone or get married. I didn’t think I’d EVER get to write a post like this one. But I’m happy to finally get to. I know people LOVE engagement stories so here is mine.

My boyfriend and I had been dating for about 15 months and since about month 10ish he has said that he wanted to marry me and that a ring was coming “soon.” Whatever soon means…you know what I mean ladies.

A few weeks before I was leaving for a trip my boyfriend told me he should go ring shopping so that he can propose to me before I go on vacation/to my cousin’s wedding. But it was in this broad sense and I wasn’t sure if he was serious.

I was leaving for my trip on a Wednesday. By the Thursday before I was convinced it wasn’t going to happen because as far as I knew he hadn’t gone ring shopping. 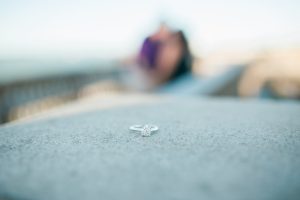 Friday afternoon while I was still at work he texted me and told him that him and his mom had to run some “errands” but he would see me after work. Which is kind of weird but not at the same time. The wording of it was the part that was odd but I was busy and kind of blew it off.

When I got off work I texted him and he knew I had some errands to do and he said he was on his way home and that he’d be there in 15-20 minutes…which is about the distance of the mall ha. I was kind of suspicious but wasn’t really sure and didn’t want to get my hopes up.

Then as soon as I got to his house he was all we should go for a walk later for some Ben and Jerry’s. We went WAY earlier than we usually do and I kind of sensed that he was anxious about something but i wasn’t going to read into it. 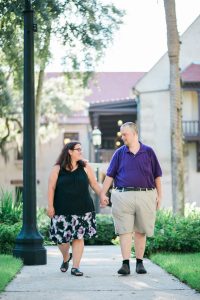 So we went for a walk and we walked to the square (not in the direction of the ice cream place) and he was all let’s cross here and here. And then he stopped at this bench where we first met and he was all this is where it all began and the next thing I knew he was down on one knee and said Beth Anne I love you with all my heart will you marry me? And took out the ring.

At first, I was like omg is this really happening?!!? And was kind of stunned and I probably said something dumb like for real? And then I said Yes! And we kissed. 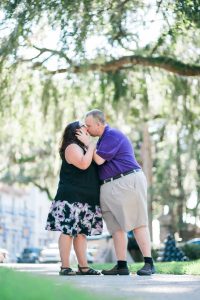 Then this guy (probably in his 40s was walking around downtown with 3 little kids and came up to us and was like uhm excuse me did what I think just happened really happen? And I said yes and showed him my ring. And he’s all I need to take a picture for you guys! And made Tom get back down on his knee and took our picture.

And hence the picture we have. Ironically everyone has been asking who took the picture?!!? lol 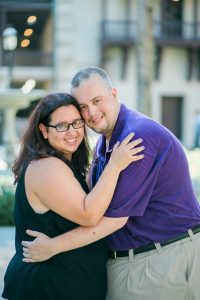