It just so happens that the two cities that we decided to make specific pilgrimages to on our trip the saints both have feast days in October! Today we are off to Assisi, Italy home of St. Francis.

Every saint has a feast day in which we celebrate their life and today, October 4th, is the Feast of St. Francis. St. Francis is the patron saint for animals and many churches will have an animal blessing the weekend of his feast day.

I guest blogged about my trip to Assisi a little bit over at Cherishing Everyday Beauty back in August but that was more about St. Francis than the actual city of Assisi.

Assisi is only a 2 hour train ride from Rome. So one day while we were staying in Rome we decided to take the train to Assisi. Looking back I kind of wished we had just stayed in Assisi for a day or two but it worked out in the end. We actually almost didn’t make it to Assisi. We had about an 11 or 11:30am train to Assisi that day. We got up early to go visit the Purgatory Church but we got lost as we took the wrong bus and ended up way on the other side of the city. By the time we got to the train station it was after 12:00 and the next train to Assisi wasn’t until 2pm. We decided to go eat lunch first and then we’d make a decision.

Side note: I remember the place we had lunch had Penne alla Vodka which is one of my FAVORITE Italian dishes and it was DELICIOUS!!

After we had lunch we decided it was almost time for the 2pm train so we decided to go ahead to Assisi anyway since we had already purchased the train tickets. Whenever we took the train I was always mesmerized by the scenery. Meanwhile my mom would just sleep. LOL.

Assisi is up in the mountains of Italy. Excuse the glare as this photo was taken on the train. 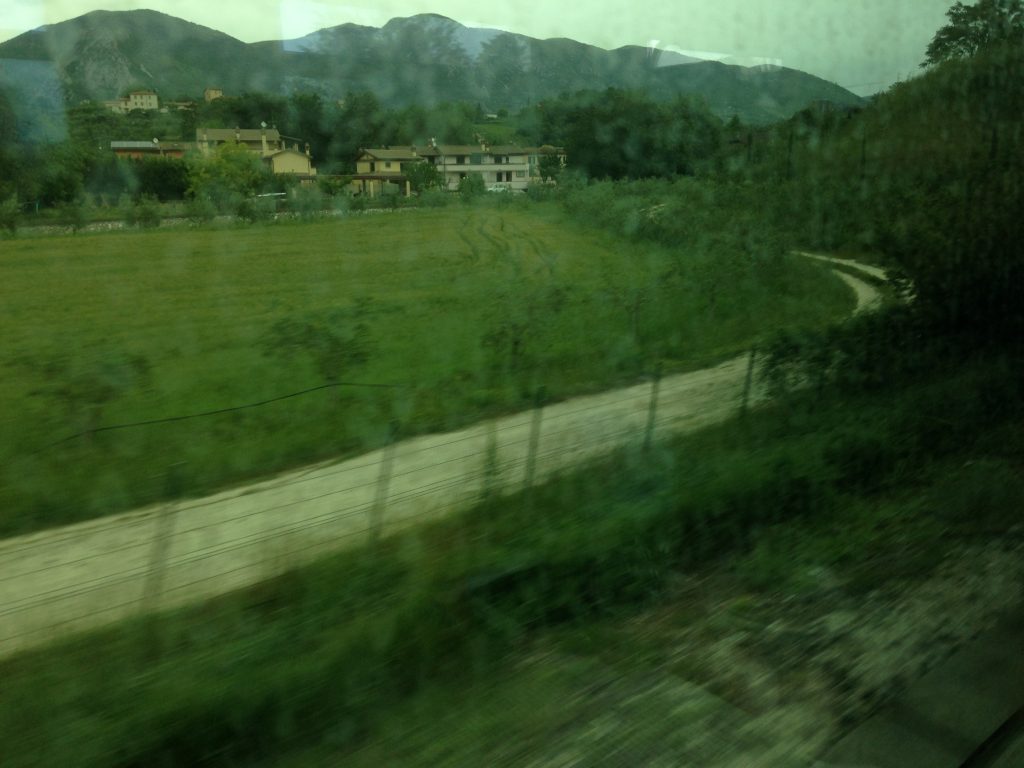 The instructions I had were to “get off the bus at the top of the hill and you would be at a bus depot” so that is what I did but apparently there is another bus depot further up so we weren’t quite where we wanted to be. We were close enough to the Basilica of St. Francis and we were fine with that as we didn’t really have enough time to see everything we wanted to see since we got there so late.

The views from the top of the hill were gorgeous. You could see hills and mountains and houses for miles!

We headed to the Basilica of St. Francis since we were right there and then we decided we would see where we were after we finished. This church was HUGE we spent over an hour at the church walking around and praying and visiting the grounds. This is the view as we walked toward the church. 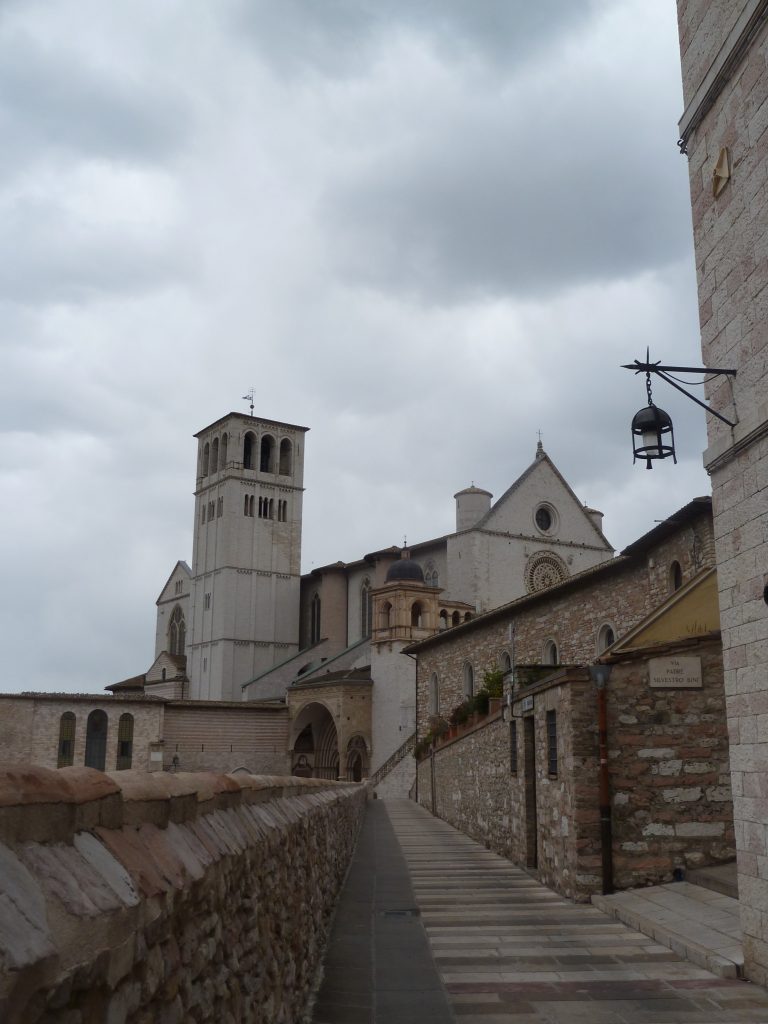 At the entrance of the church was this sign about now St. Pope John XXIII. It basically said he visited this church on the feast day of St. Francis on October 4, 1962…and other stuff in Italian that I can’t read. 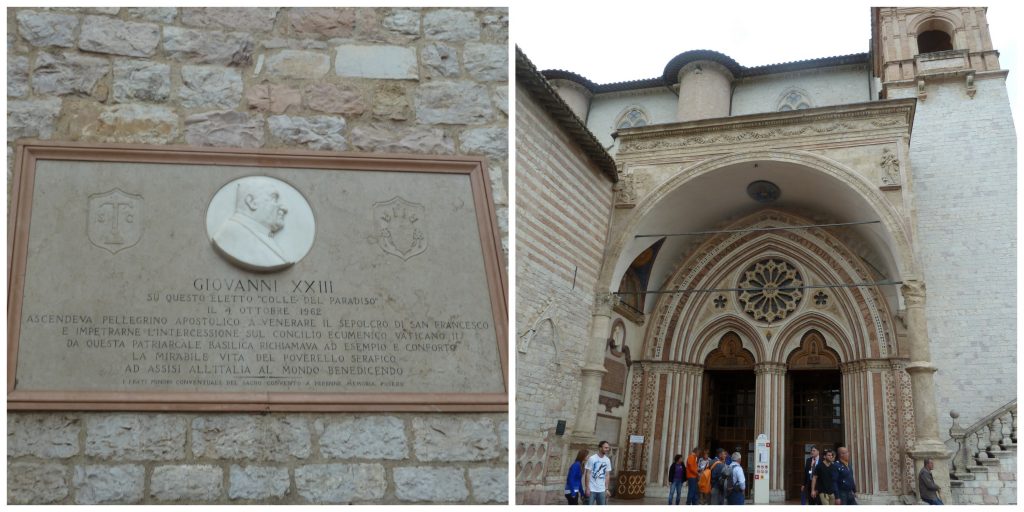 You weren’t allowed to take pictures inside the church to keep it a reverent place so I don’t have any pictures from inside. It was a really pretty church to walk around there was so much to see. When you went downstairs you could visit St. Francis’ tomb. There are monks lay and ordained that work there walking around. We were able to have a mass said for my dad that I learned afterwards thanks to his former students on his facebook page that he took a group of students to Assisi many years ago. 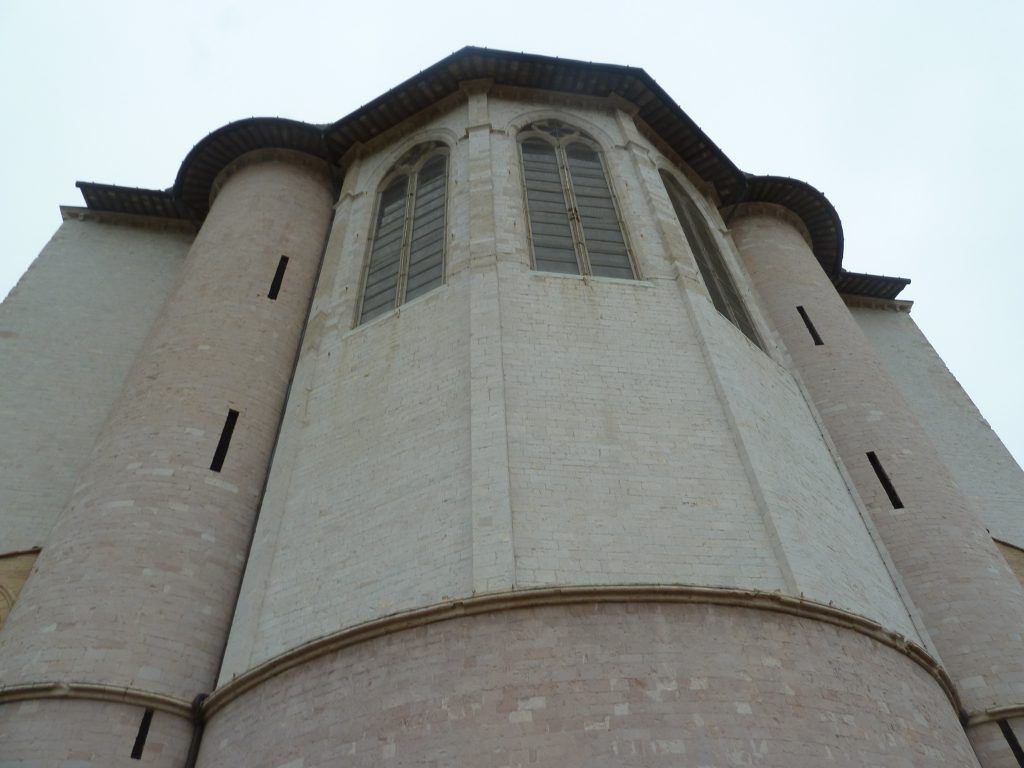 One thing was that the monks are very controlling about their candles. You could purchase candles to light but you couldn’t light them. You just put them in these baskets in different chapels and the monks would light them at the end of the day. My mom had no idea and she ended up keeping the candle because she couldn’t figure out what out where to light them and forgot to ask. HA.

After we finished on the ground floor we went up these stairs to this balcony area where we were able to visit the gift shop. There is also a museum up there but it was already closed. 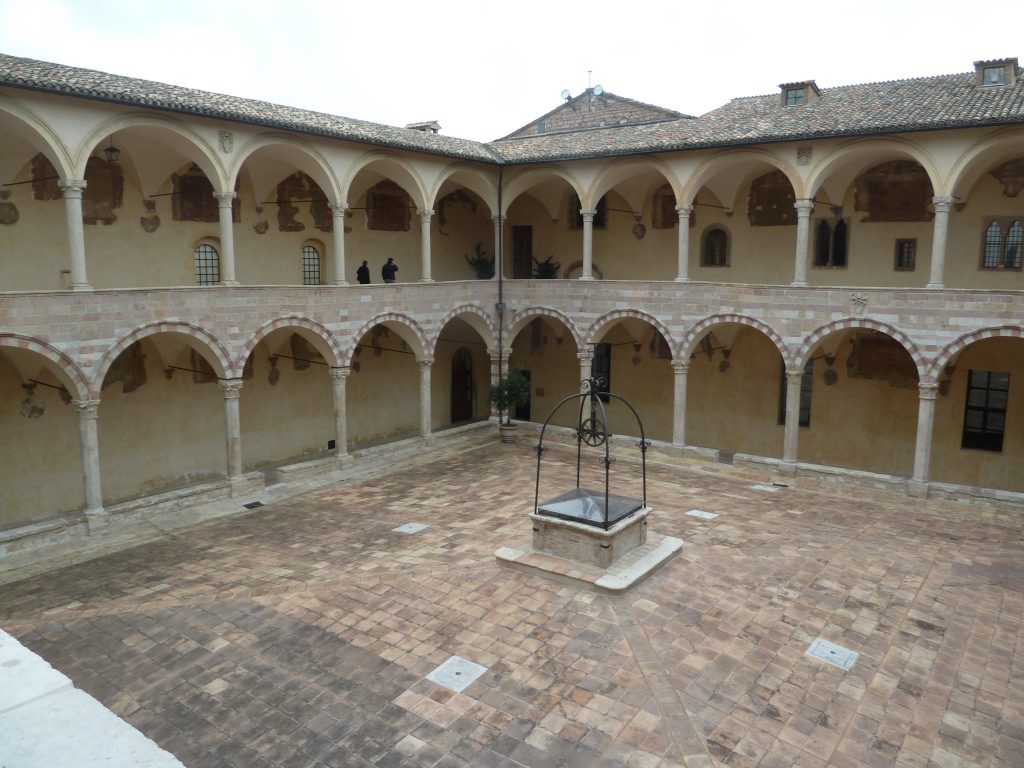 After we visited the giftshop we went into the upper chapel where there were Frescos on the walls that detailed St. Francis’ life. They were very detailed and well done. We used Rick Steves audio app that had a full tour of the basilica and he went through just about every Fresco in the chapel.

Finally we were outside the main entrance of the church and there were several pilgrimage groups there praying. It was really nice to see the devotion to St. Francis and prayer after being in the hustle and bustle of Rome with people just trying to see everything and not stop to take a moment to pray. Like I said in my post about Lisieux we felt that Assisi and Lisieux were the most spiritual places we visited and I think it was really evident in Assisi. Even after coming home and talking to others who have been to Assisi and listening to people on the radio they all say there is just this feeling in Assisi that you really can’t describe in words of how prayerful and spiritual the city is. 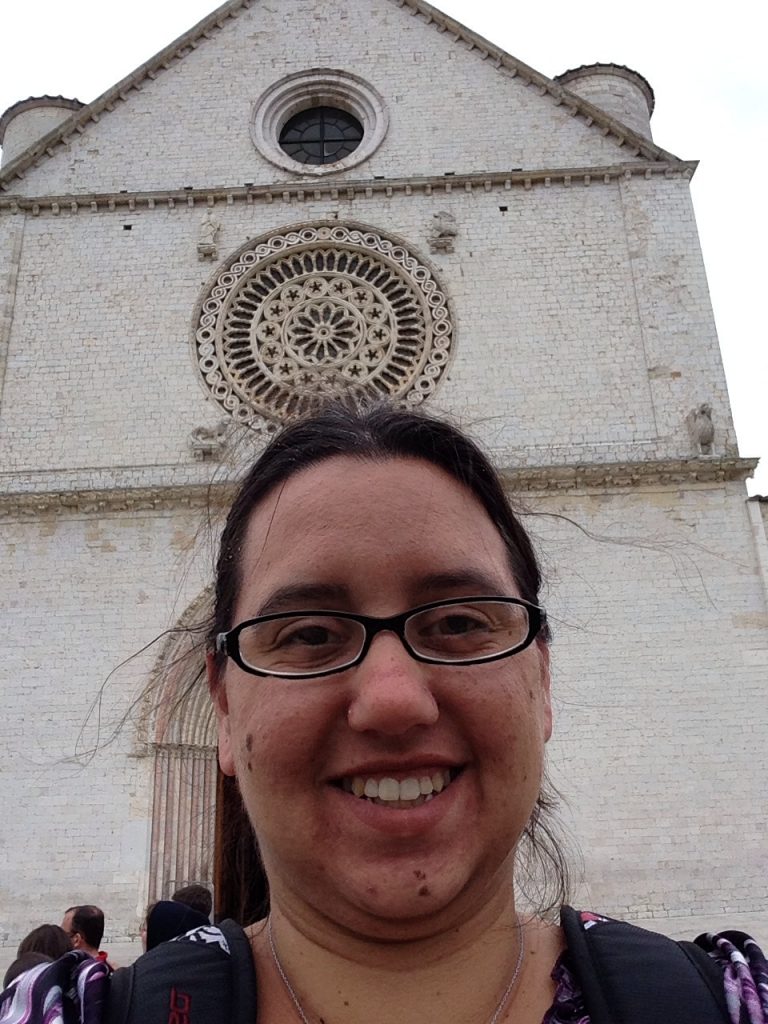 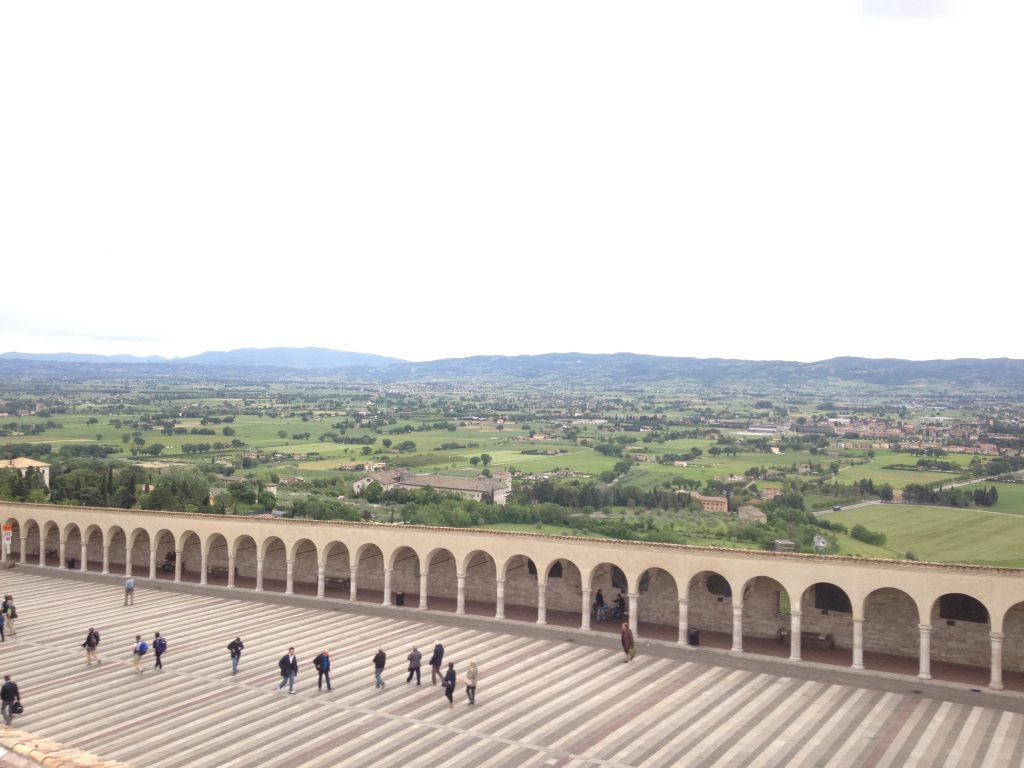 When we were in Rome we had dinner with some seminarians we knew studying there (more on that later in the month) and they all said they had great pizza in Assisi! Well we couldn’t find any of these pizza places while we were there. We really didn’t see much more than souvenir shops. I think we were on the wrong side of the city. 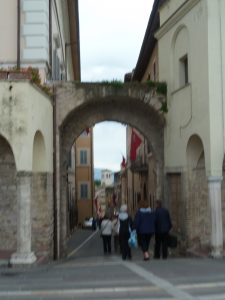 It was getting late by this time as it was close to 7pm and we didn’t know how late the bus ran to get back to the train station so we decided to head down to the train and find something to eat there.

We didn’t have a lot of time before the train came and we didn’t really want to wait for the next train so we ended up eating at MCDONALDS!! HAHAHA! I thought it was pretty funny that here we were in ITALY and we had McDonalds! However, believe it or not McDonalds in Italy tastes the same as McDonalds in the United States!

Day trip to the Cliche city of Pisa, Italy
Train Ride along the Coast of Italy